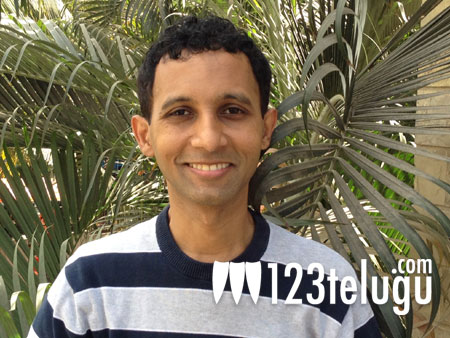 If you take the image of a typical Telugu movie director as your reference, Kiran Meegada is as different as they come. The soft spoken and almost shy NRI is a well experienced IT professional who has worked in some of the top MNC’s. A deep rooted passion for movies led him on a journey that culminated in the production of the movie ‘My Heart is Beating..Adola’. We caught up with Kiran for an exclusive chitchat and here is the transcript for you folks.

After exchanging pleasantries, we began the interview.

Q) Tell us about yourself
A) I am an IT professional with more than 15 years of experience as a manager. But movies were always my first love. I worked as a co-director and assisted in the production of a few movies during their US schedules.Chintakayala Ravi, Swagatham and Sangamam fall into that category. My connection with the industry deepened during those times and I made good friends.

Q) What can you tell us about your movie ‘My Heart is Beating’?
A) The movie is a soft romantic entertainer that shows what happens when two people fail to express their love because of inhibitions. It also showcases the life of young Telugu people in America. Not many people in Andhra Pradesh know how a typical day in the life of an NRI unfolds and this is our attempt at showcasing that. Almost every family in urban Andhra Pradesh has some relative or the other living in the USA. They will connect very strongly with this movie.

Q) So will that be the main USP of your movie?
A) Yes, but its not the only one. For perhaps the first time, two directors have worked on a film simultaneously. The other director is Arun Rudra and both of us worked simultaneously on this project. He has penned the script during the initial stages and I came in later. Dialogues penned by Siva Somayajula will also be a major attraction. He has really elevated the movie to a new level.

Q) How did this project happen?
A) As they say, people were in the right place at the right time and everything just fell into place beautifully. I was introduced to Arun Rudra through a common friend and we just hit if off immediately. As we spoke about movies, we realized that our thinking was along the same wavelength. Arun narrated this script to me and I was instantly impressed. We developed mutual respect for each other and decided to work on this project.

Q) Was it easy to shoot a movie with two directors at the helm?
A) Surprisingly, yes. We had our creative differences but both Arun and I respect each other. We did not let egos interfere with our work. Logic and the best solution always won whenever we had differences over the composition of a scene. We wrapped up the movie at a good pace, 42 Days to be exact.

Q) This is your first project as a director. Did you find it tough to shoot a movie with no experience?
A) As I said, I have some experience in movie production and I also used a lot of my project management skills. Being familiar with both production and direction helped me achieve a greater control over the film. Sekhar Kammula, Nagesh Kukunoor, Deva Katta and Krish really inspire me. They laid out a path for people like me to follow. When you see people like that who dare to dream and pursue that dream, it is a great motivation.

Q)How did you pick your lead cast?
A) We wanted Telugu speaking people for the lead roles. All our actors are working professionals and they all became a part of this movie only out of sheer passion. Revanth and Rajitha will be the principal pair. Rajinikanth and Sarayu will be seen as the second pair.

Q) Are there any established artistes in the movie?
A) No. But we have some very accomplished performers in our team. Revanth is a terrific dancer and he has a good youtube presence. Ashwin Reddy will impress you all with his brilliant comedy act. The surprise package of the film will be Srini Kolla. Srini will go places with this movie and he will make a lasting impression with his performance. He is an intense actor.

Q) You are a debut director. How did you find a producer?
A) Technology and networking played a big role in this. I was introduced to producer K.Rajasekhar and he really believed in the project. He took this movie to a new level with his incredible focus and experience. He is doing a great job with the promotions and we are happy and lucky to get a producer like that.

Q) Any message you would like to convey?
A) I would like to personally express my thanks to each and every one who assisted Rudra and me in this journey. Kapileshwar Punna and Ravi Kottapalli really slogged it out in the direction department. I would also like to thank my previous directors for letting me observe and learn the nuances of movie making. I hope the movie lovers of Andhra Pradesh like ‘My Heart is Beating…Adola’. It is an honest and entertaining film.

With that, we ended the interview. Let us wish Kiran the very best for his film. You can follow him on Facebook at http://www.facebook.com/meegada