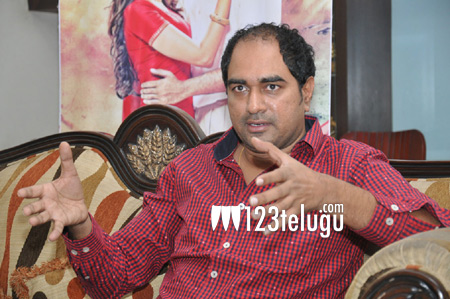 Varun Tej’s Kanche is off to a flying start in all its areas of release. All those who have seen the film are raving about the rich visuals and strong content. On this occasion, we caught up with the genius director Krish for an exclusive interview. Let’s see what he has to say.

Q)What is going on in your mind right now ?

I have never felt like this for any of my previous films. The kind of compliments I am getting, and the way audience are lapping up this epic war drama is just unbelievable. I am truly overwhelmed.

Q)How nervous were you before the film’s release ?

Frankly, I was very nervous as we had made Kanche with a lot of hard earned money. The success of the film is so important as it would allow us to dream even more bigger in the future.

Q)What was the best compliment you got for Kanche ?

A hardcore commercial director like Raghavendra Rao garu called me and said that he is in awe of the film. Several other celebs have also been calling to wish me.

Q)How did you celebrate the success ?

During a small private gathering yesterday, I turned left and saw Varun so happy. Then I turned right and saw Pragya beaming with joy and finally when I saw my producer Rajeev jumping with joy, what else could have I asked for.

Q)How is the response of the film in general ?

Every section of the audience is loving our film. Ambika Krishna, a popular producer from Andhra called me and said that the response in the interior areas is amazing and people are loving Varun Tej big time.

Q)How important are Varun and Pragya’s performance for the success of the film ?

I have already said this before. No one could have done Hari Babu’s role other than Varun Tej. He was quite vulnerable in the flash back episodes and shifted gears as an aggressive solider. Pragya suited her role perfectly and gave a splendid performance.

Q)What do you have say to those who say that the film is a bit slow ?

See ! You have to understand that the subject of the film is quite delicate. Moreover, things in the early 30’s were quite slow and people had varied and subtle emotions. The narration of the film is bound to be slow and I cannot rush things just for the sake of commercial aspects. I always knew my strengths and narrated the film according to its demand.

Q) Kanche is touted as the first ever Indian film made on world war II. How do you feel ?

I am humbled and take full credit for it. Kanche is indeed the first epic war drama on Indian screens and no one can take away the credit from me.

Q)Business wise, how is the film doing ?

For the first time in my career, I will see decent profits. The business of the film is growing by leaps and bounds and the overseas reports are also superb. With the weekend coming in, the figures will definitely multiply.

I have signed a couple of big banners in Bollywood and will speak about them only when time comes. Currently, I want to enjoy the success of the film whole heartedly.

With that, we ended our interview with Krish and wished him a hearty congratulations for his film’s success.