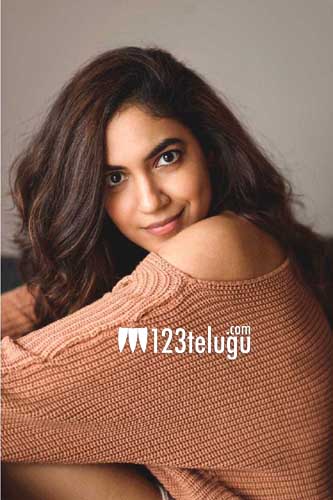 We have started a lockdown interview series yesterday and the response to the Eesha Rebba’s interview was superb. So today here is our exclusive phone interview with the beautiful and natural actress Ritu Varma. She opens up about the lockdown, film career, doing fewer films and Tamil cinema.

How are you dealing with the lockdown situation?

I did not pay much heed to this disease when it started in China. We were still shooting for Tuck Jagdish in the Godavari region till the lockdown was announced. Now I am home safe and relaxing. Not going out is irritating me a bit but the lockdown is for our safety so we have to stay indoors.

How are you keeping yourself busy?

I am mostly at home and did not go out even once post the lockdown. I am not those ones who watch TV at home. I am reading several autobiographies as of now. I am done with Marilyn Monroe’s autobiography.

It was long due as the film was in the making for a long time. The response has been just amazing. Even to date, the praise for my role has not stopped and I am so happy that noted critics have liked my work. The film has done equally well in Tamil cinema and has given me a new lease of life in my career.

Why was it promoted so less and how was it working with Dulquer?

I cannot comment more on that aspect because it was something to do with the producer’s side. But whatever we spoke reached well. I still remember people asking me why I did such a dull role. Not many knew that there was a big twist in the film which we hid. Working with Duqluer was always a dream. He is such a confident actor and allowed me a lot of space in the film. Not once was he was in-confident that I had a powerful role.

Your negative role was quite surprising?

Yes, I was waiting for such a role for a long time. It had so much for me to do in the film. That is a kind of role which challenges me to do better. I am game for doing commercial films as well but there has to be weight in my roles.

It was not planned at all. Some of my other language films got delayed. Also, there were so many offers in Telugu but I did not like them at all. I feel that there should be something for me to do in the film. I know it was a risky move at that stage of my career but I stuck to my instinct and here I am doing some good films.

So, what all films are you doing now?

I have five films lined and you will see me a lot in the next one and half years. I am doing tuck Jagadish with Nani. I have a film lined up with Naga Shourya, Sharwanand and also a Telugu film with Ashok Selvan. Then my Vikram film Dhruva Nakshatiram will be out this year.

Talk is that your film with Naga Shourya has been stalled?

No. all those reports are baseless. I recently spoke with the director and we are very much on track. The film is a beautiful love story and I am eagerly looking forward to shooting.

Tell us about Tuck Jagdish and film with Sharwa?

Tuck Jagadish is a lovely film and for the first time, I am playing a village belle. I have already shot for the film and Nani will impress you with his emotional performance. Sharwa’s film is almost done and I cannot comment on it more as it is bilingual. Then, there is a film with Ashok Selvan which has been shot mostly in the UK.

Many feel that you did not use your Pelli Choopulu popularity well?

It is not right. As I told you, I did not want to do films which had nothing for me to do. I waited patiently and got a chance to work with directors like Gautam Menon and act with heroes like Vikram, Nani, and Dulquer Salman. I feel my time will surely come this year. I am not one of those who are desperately looking for work. I take my time.

Difference between Tamil and Telugu cinema?

I have got huge respect in Tamil cinema especially after Kanulu Kanulu. Not may imagine me in such a negative role. I feel there is no difference between the two industries as both are the same.

You are young and there is not much written about you and linkups?

Laughs! I know there are a lot of handsome heroes who I work with. But what to do most of them are married.

Any actress that has inspired you in recent times?

Alia Bhatt is one actress who has impressed me with her work. The scripts being chosen by Deepika are also inspiring me a lot.

When will you enter the OTT platform?

Initially, I did not want to web series for two years. But times have changed and there is a lot to do in these shows and am waiting for the right role to make my debut.
Message for people during this lockdown?

Please be indoors and stay safe. Mostly, I do not want people to forward and hate messages to create fear amongst others. This lockdown is for our good and there is nothing wrong with staying home with your loved ones.

With that, we ended our interview with Ritu and wished her the best of luck.