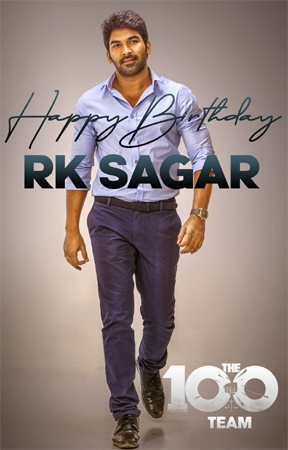 After attaining stardom in the television industry with popular series Mogali Rekulu and Chakravakam, actor RK Sagar made a successful transition to feature films as a lead hero.

Sagar’s new film, The 100, was announced last week. The actor is celebrating his birthday today, and here’s a brief interview with him to know what he’s up to on this special day and a bit more about his upcoming projects.

Q) Firstly, birthday wishes from 123telugu.com. How are you going to celebrate this special day?

A) Thank you so much for your wishes. Well, it’s going to be a working birthday for me as I’ll be busy shooting for another project.

A) Oh, the response has been beyond my expectations. I have been getting a terrific response from fans and well-wishers. Even some distributors called me up and appreciated the title. It’s been a great start for us with positive vibes all-over.

Q) The title indeed raised curiosity. Could you explain the idea behind it?

A) The 100 is not just about the Police Control Room number. There is a very interesting and important thought behind the title, and audiences will come to realise it when they watch the movie in cinemas. The 100 is an emotional action thriller inspired by real incidents and the title justifies it completely.

Q) You are playing an IPS officer in The 100. Tell us about your role?

A) I had already played a cop in Mogali Rekulu and my role was received very well by the viewers for several years. I was initially skeptical about playing a cop again in The 100, as I wondered if it will become repetitive and if the role will manage to recreate the kind of impact created by my character in Mogali Rekulu.

But my role in The 100 has a lot of potential. The character has many variations, and the aggression and emotions layered in my character will surely offer a new experience. I am confident that The 100 will be a memorable milestone in my career.

Q) Tell us more about your characterization in the movie?

A) I play IPS Vikranth who just completes his training and joins the service. The emotions portrayed by my character will be very authentic and close to reality sans the regular cinematic feel. I will sport a lean and fit look throughout the film and even my body language will reflect my character.

Q) Given the present scenario, how are you planning the shooting and release?

A) We will commence shooting from the first week of September. A major portion of the film will be shot in realistic locations in and around Hyderabad and Warangal. We are planning for a direct theatrical release, as the story has a huge scale and span. As of now, we are aiming at a Republic Day weekend release.

Q) How are you enjoying your journey from television to movies?

A) I received a lot of love for my work in television, which I respect immensely and consider it a university where I learnt the nuances of the craft. Movies was a natural progression for me. I have been receiving immense love from my fans, media personnel and well-wishers in the film industry. They are my driving force and I will always strive hard to earn their love and respect.

Q) You collaborated with Dil Raju for Shaadi Mubarak. Tell us about your association?

A) Dil Raju’s support during Shaadi Mubarak was unforgettable. He believed in that film and was quite happy with the way it was received by the audience and the media. He told me that the film was received quite well even in the US.

Q) Any plans to collaborate with top banners and filmmakers in future?

A) Yeah, plans are definitely on and even the talks are going on. I will reveal more at an appropriate time.

Q) Do you have any plans to debut in the OTT scene?

A) Definitely, if a right project with an interesting character comes my way. Audiences across the country are eager to watch good content irrespective of the language. OTT is the best platform to reach out to a large number of audience.

A) Apart from The 100 which will go on the floors in September, I already have a spy thriller for which I’m shooting currently. An official announcement regarding this project will be out in a few days. As for my future projects, I’m eager to play authentic characters in movies which are socially relevant.