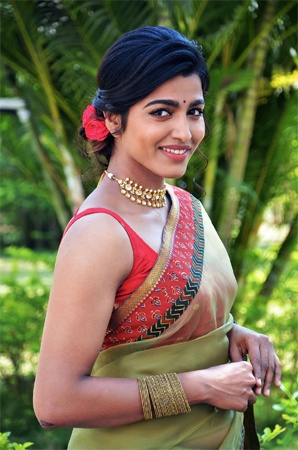 Shikaru is a comedy entertainer that will hit the screens tomorrow. On this occasion, we caught up with the film’s heroine Dhansika for an exclusive interview. Here is the transcript.

What is the response to Shikaru’s promotions?

There is a very good response to our promotions. The songs, promos, and other info from the film have clicked quite well with the audience. I am super excited about the film’s release tomorrow.

When I got this offer, I was super excited. The story itself is quite interesting and the way my character is written and executed by director Hari is top-notch. I have never done such a role so far in my career and this made me say yes to the comedy caper right away.

I play the role of Devika who is a housewife and is trying hard to stand up for herself in life. How I take a daring step in life and get stuck into deep problems is the basic story of the film. I got a good chance to convey various emotions in this role.

My director Hari was quite clear as to what I would wear, and how I would react and go about my role. The most difficult part for me was doing comedy in the film. Evoking fun is very difficult but I went all out and did my role convincingly.

Tell us about your director Hari?

Oh, he has become a dear friend now. From day one, he had a lot of clarity on the script and narrated it in a very entertaining manner. The way he has extracted work from the four young boys and given a small but cute message, in the end, is quite good. He will surely go places in the future.

Kishore plays my husband in the film and we share some very interesting scenes. Kishore carries a serious image on the screen but is a very fun-loving person in real life. I had a great time working with him.

Shikaru is your Telugu debut. What made you come here so late?

Right from the beginning, I am very fond of Telugu cinema. Whenever I get dull, I watch a fun-filled Telugu film and get back in high spirits. As I was busy with multiple films in Telugu, I did not get much time. But Shikaru will change that as this film will bring me good offers in Telugu.

Finally sum of Shikaru for us?

Shikaru is a full-on fun comedy caper. There is no vulgarity and everyone can happily watch it. Right from the first half to the end, there is decent entertainment with a simple message. The youth will especially like the film.