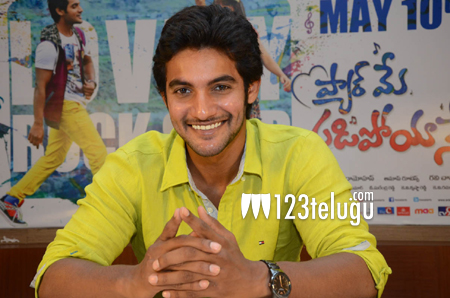 Young hero Aadi, is back after a brief gap with yet another romantic love story in Pyar Mein Padipoyane. Slated to hit the screens tomorrow, we caught up with Aadi for a brief chit chat. Let’s see what Aadi has to say.

Why did you take one year gap after your last release ?

It was never intentional. Some how, all my films had a gap of one year each. After making my debut in 2011, this is only my fourth film. From now on, I have planned to release more films in a year, and you will see me in three films this year.

How different is Pyar Mein Padipoyane from other love stories ?

Our film is a musical love story. It deals with the love story of how a music director, who never believes in love reacts when he falls in love, and how far does he go in love.

Director Ravi Chavali has done some mass entertainers in the past. Do you think he has done justice with this film ?

Ravi wanted to make an out and out love story with me. Though I did two love stories in the past, the way he has handled the subject, and executed it is something new and interesting.

You are known for your dances. Did you try anything new with this film ?

There are no heavy dance movements in this film, but I have tried the hip hop style of dancing in my songs which look stylish and innovative.

Why did you cast Sanvi once again as the female lead ?

There were two reasons for this. Our pair in Lovely was hugely appreciated and moreover, Sanvi suited this character completely.

When are you going to act with your dad ?

We have not planned anything yet. If there is a script where my dad has a powerful role, we would surely approach him. There is still lot of time and experience for me to act opposite a seasoned actor like him.

When are you making your Kannada debut ?

There are a lot of offers coming in, but I have just started my journey in Telugu. Once I prove myself in Tollywood, then I can think about other languages.

Heard that you have developed a six pack body for this film ?

Yes ! I have acquired a six pack body, but that is for my upcoming film Rough.

When are you going to act in powerful roles like your dad ?

I am still very young and concentrating on youthful entertainers. When the time and age comes for roles like those, I will surely do them.