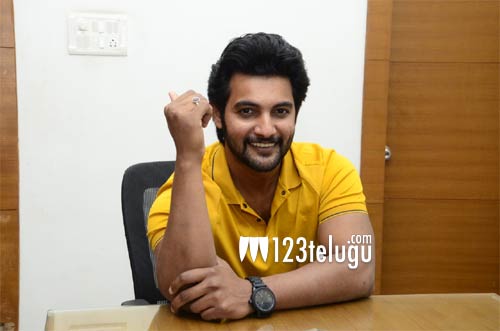 Aadi Pudipeddi and Surbhi’s romantic drama, Sashi is gearing up for a March 19th release. On this occasion, we had a brief interview with hero Aadi. Here is the transcript.

Q) How did this film come to you?

Sometime back, our producer RP Varma distributed my film, Lovely for the Vizag region. One day he called and asked me to listen to Sasshi’s script. After the first narration itself, I felt that the script has a soul and immediately said okay to do the movie.

Q) What is Sashi all about?

In the theatrical trailer, we had already revealed that Sashi’s title is based on the heroine’s name. But in the film, the word Sashi is interlinked with yet another subplot. To know that you have to watch the film.

He came to me with a bound script and gave a crystal clear narration about each and every character in the movie. He also came up with the five tunes at that time itself and worked hard during the shooting process. I’m totally impressed with Srinivas’s dedication and commitment to work.

Q) Highlight of the movie?

Apart from the love story, the film has a very good family drama. The drama between my family members in the film is going to be very emotional. Adding to it, Rajiv Kanakala’s character will also be loved by the audience.

Q) About the response to Okey Oka Lokam song?

Yeah, not only me but my entire team is very happy with the kind of response for the song. Definitely, the song has helped a lot to generate a positive buzz for the film.

Currently, I’m working on two projects. A few more projects are in the discussion stage.