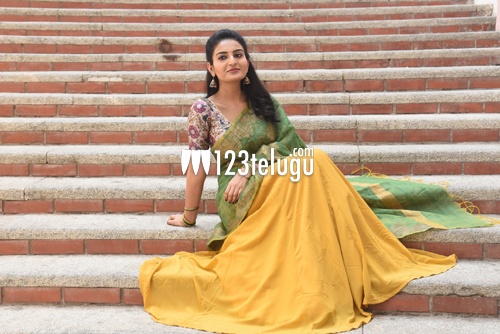 Ananya Nagalla is a Telugu girl who has got the opportunity to do a key role in Vakeel Saab. On this occasion, we spoke to her about the film and future projects. Here is the transcript.

As you all know, I have done Mallesham with Priyadarshi. Venu Sriram saw that movie and approached me for this role. I went through three rounds of auditions and then got the offer finally. During the auditions, I did not know that it was for a Pawan Kalyan film.

The moment I knew that I bagged a Pawan Kalyan film, I was blank. As I have seen so many rejections in Tollywood earlier, I was not sure until the film went on floors. Once the contract was signed and dates locked, I felt so emotional and elated at the same time.

I play one of the three leads and am a very innocent girl who minds her own business. She is not into big dreams and only focuses on what she wants. What happens when such a girl gets into serious problems is the basic story.

It was lovely working with him on this film. I still remember having deep discussions about women in general with Pawan sir. We spoke about Disha’s case and how as women we are quite helpless. There were three to four deep discussions that I had and I learned a lot from him.

What kind of a problem a Telugu girl faces in the industry?

There is no problem in the industry as projected from the outside. It is only in the minds of the industry people who think that Telugu girls cannot do specific roles. When the mindset changes and people give us good roles, Telugu girls are no less.

I am shooting two Telugu films as of now. Though I am not supposed to reveal the names of the films, I have solid roles in these films.