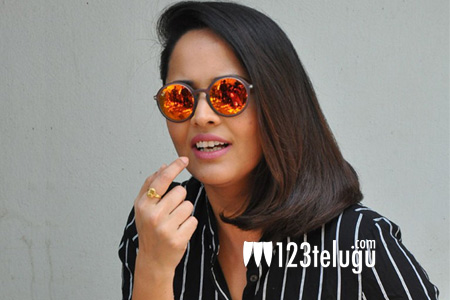 Anasuya is super happy with the way her role has been appreciated in the recently released Rangasthalam. On this occasion, we caught up with her for a detailed interview. Here is the transcript.

How is the response to your role in the film?

The response has been fabulous as a huge number of the audience have liked my role and are giving some good feedback. Initially, I had a doubt about my role but Sukumar sir gave me the confidence and the rest fell into place automatically.

One fine day, I got a call from Mytri Movie Makers saying that Sukumar wants to meet me. The moment I heard the script and my character, I felt that I should be a part of this film at any cost. My character had a lot of weight and there were no qualms in accepting this role. The only things I did not like was getting called Attha.

How was the working experience on the film?

I had a lovely time working on this film as I grew a lot as a person with this film. I had some negative thoughts as to why people always look at me as a glamorous actress who is bold even after getting married. Such things changed after the release as everyone only spoke about my role.

What kind of support did Sukumar give throughout the film?

If not for him, I would have never accepted the role. I only thought that if Sukumar saw something in me and gave me such a crucial role, I should give my 100% in the film. Right from the dialect to the body language, he and his assistants completely helped me out in bringing Rangamatta the way it did.

What kind of compliments did you receive for the film?

I am very happy with the way people are speaking about my role. All the guys on social media who used to talk about my glamor are saying that they have severe respect for me as an actress now. They have been saying that their mothers and grandmothers are liking my role very much which is a huge compliment for me.

How was it working with Ram Charan?

He is truly an amazing person. I still remember the first day of the shoot as it was the all-important drunk scene on the boat. I was very tense but things fell all in place as both I and Charan started striking off and our chemistry started clicking from that day onwards. That is the reason all our scenes have come out quite well.

What made you react so much post the Arjun Reddy event?

Even though I am very modern, somewhere along the line, I am old school in a way and didn’t like the manner in which Vijay spoke at the audio launch. I decided to go against what was going on and that is when I put my feelings in the social media. I don’t feel that saying cuss words and making statements on a stage from a hero is good as many follow you. I have no personal anger against the film and everything I said was just heartfelt as a mother.

What kind of roles do you want to do in the future?

I want to prove myself in every given role in the industry. I want to become the lady Prakash Raj in this industry. The way he slips into different age group roles is just insane. Today, I want to do an item song and tomorrow I can become a grandmother and the very next day I can become a heroine. Such is the difference I want to show in my acting prowess.

I have a film called Sacchindi Gorre which is 70% complete and also have two other big projects which I will disclose when the right time comes.