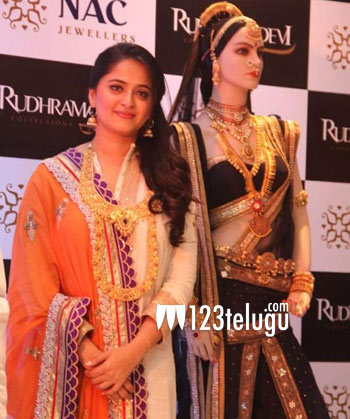 Gorgeous beauty Anushka is gearing up for the massive release of her upcoming film, Rudhramadevi. On the eve of the film’s release on October 9th, we caught up with her for a brief interview. Let’s see what she has to say.

Q) What is your feeling about the grand release of Rudhramadevi ?

I am very happy and more excited than the audience to watch the film on the big screen. A lot of hard work has been put in by a number of artists and technicians for making this film.

Q) Were you disappointed because of the delay in release?

No artist will feel bad or disappointed when a film’s release is delayed. Every filmmaker works hard to get the desired output and present the best for the audience. Gunasekhar also did the same thing.

Q) Do you consider yourself lucky for playing prominent roles in Arundathi, Baahubali and Rudhramadevi ?

Yes, I consider myself very lucky to bag opportunities in these films. Although my characters in these films look similar,the emotions are quite different.

Q) What is your feeling on playing the titular role in Rudhramadevi ?

It is an honor for me to play such a great character which has a lot prominence in Indian history. I was very impressed with Gunasekhar’s narration. I can proudly say that Rudhramadevi is the most genuine historical film of Tollywood.

Q) Have you done any research on Rudhramadevi after accepting the role ?

No ! I haven’t done any research but came to know a lot of facts about Rudhramadevi through Gunasekhar. He did a lot of research on her.

Q) Were you anxious while playing this character ?

No ! I was at ease due the support given by Gunasekhar. We tried our best to showcase the greatness of the Kakatiya kingdom to the audience.

Q) How was it working with Gunasekhar ?

Gunasekhar has clear-cut idea on all the elements required for his films. He worked very hard till the completion of the project. In my opinion, Gunasekhar is a perfectionist.

Q) How was it to work with an ensemble cast ?

It was a great experience to work with many artists. Allu Arjun did a fantastic job with the Gona Ganna Reddy character. Rana and I share a different chemistry in this film. All the remaining artists did a great job.

Q) What is the major highlight in the film ?

Story is the major highlight in the film. The visual effects and the grand sets will be a treat for audience. Rudhramadevi is a rare opportunity which allows us to know about our very own history.