Interview : Art Director Ravindra – Episodes canned in the bungalow set up are the highlight of Bhaagamathie
Published on Jan 23, 2018 12:00 pm IST 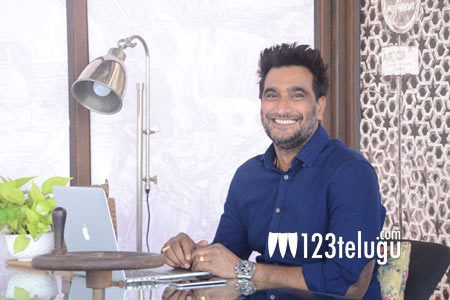 Anushka Shetty’s forthcoming flick, Bhaagamathie is hitting screens this Republic day. On this occasion, we caught up with this film’s art director Ravindra for a brief interview. Here is the transcript.

Q) Tell us about the specially erected Bungalow set in Bhaagmathie?

As per the story, the film needed a three-hundred-year-old bungalow. Keeping that in mind, we did a lot of research and designed it accordingly. We used a new technique and finished the entire set work in just twenty-nine days.

Q) What was the reaction of the producers after seeing the set work?

They were literally in a shock and were surprised by seeing the set. In fact, the grandeur and richness in the set boosted all of us to work even more effectively to deliver a quality output.

Q) Earlier, we have seen many horror films in a bungalow backdrop, what is the uniqueness in Bhaagamathie?

Actually, Bhaagamathie is not a complete horror film. Horror is just a part of the film. It has no comparison with any of the previous horror films. Almost forty days shoot happened in that Bungalow and the episodes canned in it are going to be a major highlight of the film.

Q) Industry talk is that this is one of the costliest sets in Tollywood. Is it true?

Yes! We spent a good sum of the amount to erect this set. But I can confidently say that ever penny will be visible on the screen. I can say that this is my best work to date.

Q) How is Bhaagamathie going to be?

Q) Do you listen to the entire script before doing a project?

Yes. I will definitely listen to the entire script to get a clarity on the whole concept of the film and design the required sets accordingly.

As of now, I’m doing Maruthi-Naga Chaitanya and Indraganti Mohankrishna’s films. Recently, I also committed to Sharwanad-Sudheer Varma’s film. Apart from these, I’m working on a Tamil film.