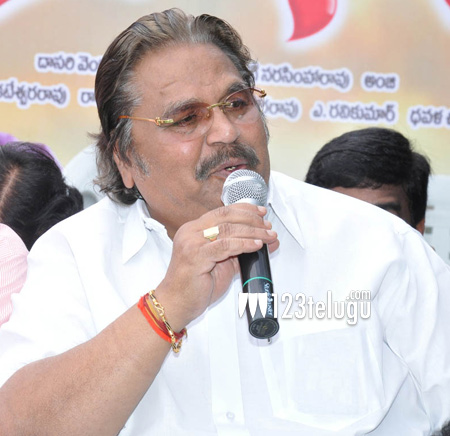 Legendary director Dasari Narayan Rao, is making his comeback with the family entertainer Erra Bus. On the eve of the film’s release, we caught up with Dasari for a brief interview. Interesting aspect of this interview is that instead of journalists asking questions, the technical team have posted the questions on behalf of the media. Here is the transcript.

How has the music of the film come out ?

The music has come out exceptionally well in the film. But the icing on the cake is Chakri’s background score, which has elevated the film to another level.

Except for one day, Vishnu was always on time and has the same disciplinary standards like his dad.

What difference did you find between Vishnu and Mohan Babu’s acting ?

It is too early to compare Vishnu to his dad. He has a long way to go, but I can say one thing that Vishnu has given a settled performance which is the best in today’s generation.

You have given chances to some young lyric writers in the film. Any special reason behind this ?

I always like the fire that the younger generation posses. I gave chance to some young lyricists as I thought that they would bring out the correct emotions of today’s youth.

How do you manage to spot talent so quickly ?

I have no clue about this as I always find what I want. May be it is an inbuilt quality in me.

How do you keep yourself updated with the current generation ?

I keep learning all the time, and watch at least one film every single day. I sit and analyze about the film’s success and at the same time find reasons as to what made the film sink. I just keep following the current scenarios and update myself regularly.