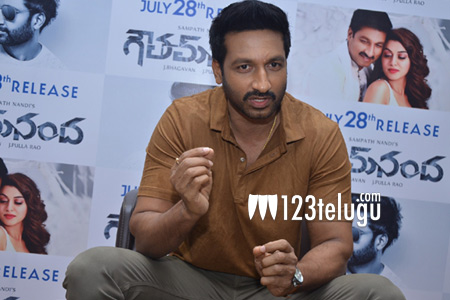 Action hero, Gopichand has banked heavily on his new film Gautam Nanda. The film is ready for a release and on this occasion, we caught up Gopichand and spoke to him in detail about the film. Here is the transcript.

How crucial is this film in your career?

It is very crucial as it has been a year since my last film came out. I already saw the film and am super confident that it will be a definite hit and everyone will surely like my performance.

I play the role of Ghattamaneni Gautam and how he becomes Gautam Nanda is the whole story all about. I had to show different variations in my getup and sat with my stylist and got myself a makeover. The first look itself was quite welcoming and I was quite surprised to see myself in such a stylish manner. I felt that I should have changed my look long back which would have helped my other films also.

He has executed the film in an even better manner than he has narrated the film. He is very clear in his approach and does not improvise at all on the sets. He has showcased me in a superb manner and I feel that Gautam Nanda is Sampath Nandi’s best film till date.

Has the film gone over budget?

Not at all. These are just rumors and in fact, my producers have already seen table profit. I also want the distributors who have spent a good amount to be safe as well and I feel this film will please everyone.

Your career is not going the way would like it off late. What do you have to say?

Yes! there were some wrong choices and then sometimes things are not in your hands. I had to see a year’s gap in my career because of all this but I feel that all will be cleared with Gautam Nanda.

Will you ever do films without action?

No! I will never leave the action part. Even if I do a love story, I will see that there is plenty of action in it. I feel that action is my forte and one should know his strengths and plan according to it.

About the recent drug culture?

Like everyone, even I am very worried about the consumption of drugs by youngsters. The film industry is being targeted too much but I feel that government is taking good steps to eradicate this from ground level which is the schools.

As of now, I have not signed any projects and am currently listening to scripts. In a hurry, I don’t want to do villain roles or any other supporting stuff and spoil my career. I am planning things very carefully now.