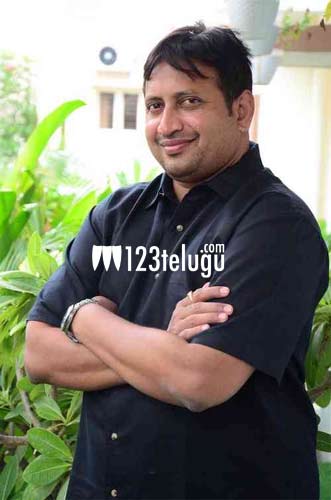 Young producer SKN scored a blockbuster with his maiden film, Vijay Deverakonda-starrer Taxiwaala. On the occasion of his birthday, SKN interacted with the media and shared several details about his journey and his future projects. Here is a brief excerpt from the interview:

How did you start your journey in movies?

I am a huge fan of Megastar Chiranjeevi sir. I used to run a Mega fan club in Eluru 18 years ago and used to update all the details about Chiru’s movies online, when internet was just catching up. I also used to publish benefit show reports for star heroes’ movies on the internet. In the process, I got associated with Allu Sirish and Chiranjeevi’s friend Koneru Kumar. Sirish introduced me to Allu Arjun at Indra’s success function in Vijayawada. After Arjun entered movies, I began working as his PRO. During this time, I also distributed movies along with director Maruthi, producer Bunny Vas and UV Creations’ Vamsi. I entered film production with Maruthi’s debut film, Ee Rojullo. It was a massive hit. Since then, I handled production formalities for all Maruthi films.

Tell us about your bond with Chiranjeevi?

As a Mega fan, I used to work for Chiru’s movies passively by sharing the updates on Twitter. Chiru watched Taxiwaala and invited me to his house and spoke affectionately for 2 hours. It was a memorable moment.

Being a producer is quite tough. How are you handling the pressure?

I have the support of strong pillars like Allu Aravind sir and UV Creations. My 15-year experience as a PRO is coming in handy in marketing and publicity. Me, Maruthi and Bunny Vas chose universally acceptable stories and got successful. Allu Aravind sir has always encouraged by giving valuable suggestions. I am forever indebted to him.

How is your association with Allu Arjun?

He has been a huge support for me, Bunny Vas and our team and always helped us in whatever way he could. It’s the confidence he gave that’s leading us. I can’t thank him enough for his support.

Tell us about your rapport with other stars in the industry?

I believe that every Mega fan is primarily a movie fan. I enjoy each and every film and share cordial ties with all the stars. I have worked for Prabhas and Ravi Teja’s films. When Taxiwaala was facing issues before its release, not just the Mega fans, but even fans of other stars supported me a lot. Winning the Z Telugu Best Debut Producer award for Taxiwaala after all that I had gone through was a memorable experience.

What is your dream project?

I treat each and every film that I work on as my dream project and work very hard. I always strive to achieve the best for me and those who travel with me. I believe that Telugu Cinema is very superior. We have already proved it with Baahubali. Very soon, Saaho, Sye Raa and RRR will showcase Tollywood stamina to the world.

I am acting as the co-producer of this movie while Bunny Vas is producing it. It’s been only 3 days since we began shooting. This film will have a totally different pattern compared to Maruthi’s previous movies. The film will have a good mix of entertainment and emotions.

What about your next projects?

I listened to many scripts after Taxiwaala. Not just the commercial aspects, I am on a lookout for scripts with novel concepts. A couple of aspiring directors have narrated their stories. I’ll announce the cast and crew once we’re done with scripting. I got an opportunity to work with a crazy star like Vijay Deverakonda on my first movie. I want to produce good content-oriented movies with all the heroes and win accolades.