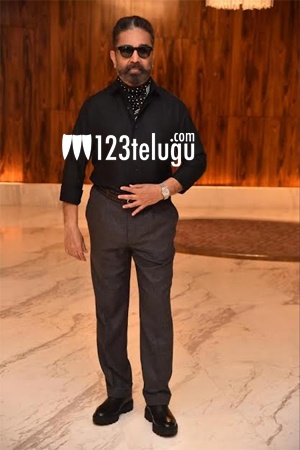 Universal actor Kamal Haasan’s latest movie Vikram is up for a grand release tomorrow across the globe. On this occasion, we met with the star actor for a brief interview. Here is the transcript.

Tell us about Vikram?

Vikram is a dark film. Be it drugs or others, every person becomes a hunter in the present society, and we all are part of it. Every character in Vikram has two angles, and you need to witness them on the big screen only. Lokesh Kanagaraj directed the movie very well.

Who is Vikram in the movie?

No magician will ever reveal the truth about how he pulls out a rabbit from the hat. In the same way, I also won’t reveal anything about it. If I do, viewers will miss the thrill. So, one should watch to know who Vikram is.

About Vijay Sethupathi and Fahadh Faasil?

Both of them performed very well in this film and you will witness their rage on screen. Coming to my films, every character has importance. Though my fans call me a ‘star,’ I always consider myself as an artist. Many people were introduced to the industry through my films. Be it Pasupathi from Pothuraju or Madhavan from Satyame Shivam, I always write powerful characters.

Tell us about Suriya’s cameo in Vikram?

Suriya will appear in a special yet powerful role. When I called him up to talk about his role in person, he just said ‘Okay, I will do it’ over the phone. On the other hand, Suriya will definitely do a film under our home banner. We have already discussed with five directors about the movie.

Your opinion about the rise of the OTT market?

To be clear, the inception of the OTT world is a good thing. But, everything has its own importance. When it comes to films, theater experience is better than OTT. For me, a theater is a more holy place than a temple as it has no religion and caste aspects.

When will you do a straight Telugu movie?

It’s been many years since I have done a direct Telugu movie. I also wanted to do a film in the coming days. The preparations are on.

He came into the movie from a big family full of artists. His great grandfather Subrahmanyam garu is a phenomenal artist and worked for many movies. So, Anirudh also gave his best and there is nothing new to be surprised about.

How do you balance your personal, professional and political lives?

Are you directing Indian 2?

Audiences are expecting at least 2 films from me in a year. If I direct Indian 2 then I can’t release 2 films every year. So, I wanted someone to handle it and I will concentrate on acting. We are trying to finish the film by the end of 2022.