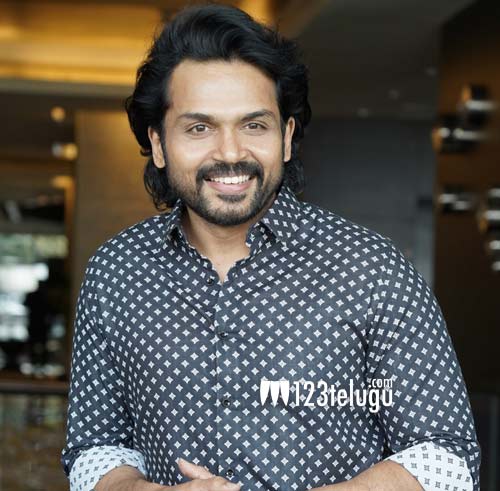 Karthi is ready with his new film Sulthan that will be out this Friday. On this occasion, we caught up with him for a detailed interview. Here is the transcript.

Sulthan is my second film with director Bakkiyaraj. He gave me a 20-minute narration about a man who takes care of 100 goons and makes sure they do not get into any mischief for a period of six months. This crazy idea impressed me and I said yes to the film.

How confident are you about the film’s success?

Sulthan is a film which the entire family can watch. We got a lot of OTT offers but I wanted a big-screen release as the subject itself is like that. I have watched the film four times to date and never got bored. I feel the audience will also love the film.

How difficult was it to shoot with 100 co-stars each day?

It was a daunting task but I enjoyed it completely. The 100 goons are all proper characters in the film and are in almost all the scenes. To fit them in a frame was a tough task for our cameraman. We also shot the film during Covid time and things were a bit scary but we all came out healthy.

I play a guy who is quite educated and has his own plans in life. He dreams of setting up a business but is stuck with a promise that he makes to his dad. Why did he do that and how he fulfilled the promise is the whole story.

I had a lovely time working with her. She is playing a village belle and worked so hard for her role. Rashmika is always on time, ready with her dialogues, and gave bulk dates whenever we wanted. She is a talent to watch out for and will go a long way in Tamil.

It is unfortunate but Wild Dog is a big film and I want it to also do well. I personally thank Nagarjuna Garu for speaking so well about me and our film at his pre-release event. This shows his class and encouragement. He is like my own brother now.

Post this film, I am doing Ponnian Selvan with Mani Ratnam. That is an epic film and will make India proud. I will also do a film with Vishal’s Abhimanyudu movie director. I play a double role and am super excited about it.