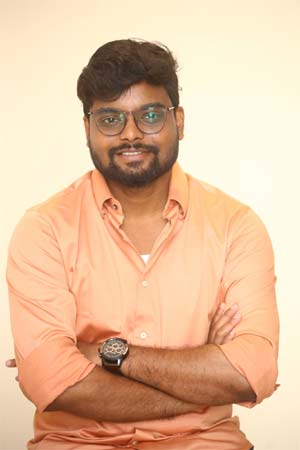 Swatimutyam starring Ganesh and Varsha Bollamma in the lead role is slated for a grand release on October 5th. The family entertainer is directed by debutant Lakshman K Krishna and produced by Suryadevara Naga Vamsi under the Sithara Entertainments banner. Ahead of the film’s release, we interacted with the director. Here is the transcript.

What was your inspiration to make Swatimutyam?

I got the idea out of my personal experience. When we see a low in our career or life, even our close ones make a mockery of us. We might not be able to bear it sometimes. This generates scope for more drama and emotions. So, a few things in my life made me do Swatimutyam.

The film is all about a guy named Balamuralikrishna who hails from a small town and gets a government job after his education. His whole family is firmly determined to get him married soon. The challenges they face in this process form the crux of the story.

Why did you decide to have the classic title Swatimutyam?

We were thinking about many titles and it is when Radhakrishna (Chinna Babu) Garu suggested that we go ahead with Swatimutyam considering the innocence present in the hero’s character. I was initially skeptical but Chinna Babu Garu assured me that once the trailer comes out, the audience will understand the reason behind having this title.

Is Varsha Bollamma your first choice?

She certainly is my first choice. After watching 96 I decided to make a film with such an actress. She was in my mind when I was writing the female character as well. We happened to watch her Middle-Class Melodies and then we roped her into our project.

On releasing along with big films on Dussehra?

It is my producer’s call to go ahead with the October 5 release. They want to give a family entertainer on the festival day. Being a huge fan of Chiranjeevi, I am quite happy that my film is releasing on the same day as his.

Who inspired you to become a film director?

Maniratnam, Vamshy, Bapu, and Jandhyala are my all-time favorites. I grew up watching their films and now I am here waiting for the release of my first film.

What about your next projects?

Well, as of now I haven’t planned anything. I might work on a comedy thriller in the future.