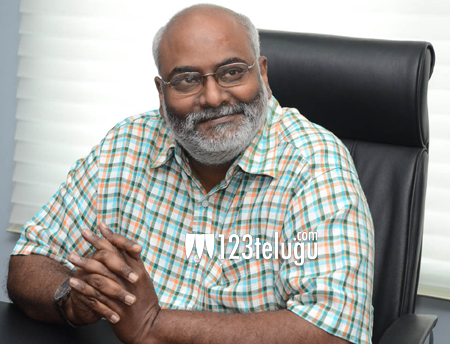 Legendary music director M M Keeravani, is one of the most revered music directors who has been enthralling the audience for more than two decades. His latest offering is ‘Dhikkulu Chudaku Ramayya’ which features Naga Shourya, Ajay and Sana Khan in the lead roles. On the eve of the films release, we caught up with Keeravani for a detailed interview. Let’s see what he has to say.

Q) This is your second film under Varahi banner, how was it working with Sai Korrapati?

A) I have a close bonding with Sai Korrapati and feel very comfortable working with him. He gives me complete freedom in composing my music and even listens to my suggestions in other matters as well.

A) Its a fresh story where a father and son fall for the same girl. Ajay plays the dad’s role and has given his career best performance and will be the main highlight of the film.

Q) How was it working with debutante Trikoti?

A) I knew Trikoti from the days he started assisting SS Rajamouli. I felt very comfortable working with him and he is a very talented director which will be proved once the film releases.

Q) The music in this film is little different than your earlier films? Is there any particular reason behind this ?

There are no love songs in this film. All of them are only situational songs and to be frank, the story inspired me a lot in composing the music. My father has written lyrics in Rajanna and just as a sentiment, he continued it in this film as well.

Q) Why are you composing music for less films these days?

A) There is no particular reason behind it. I am doing limited movies as people are not approaching me.

Q) Who according to you is a good music director in recent times?

A) There are many young music directors in the industry right now, but I am impressed with ‘Swamy Ra Ra’ fame M.R.Sunny’s work.

A) Right now, I am working for ‘Baahubali’ in Telugu and also composing music for two Bollywood films, ‘Baby’ and ‘Titli’.