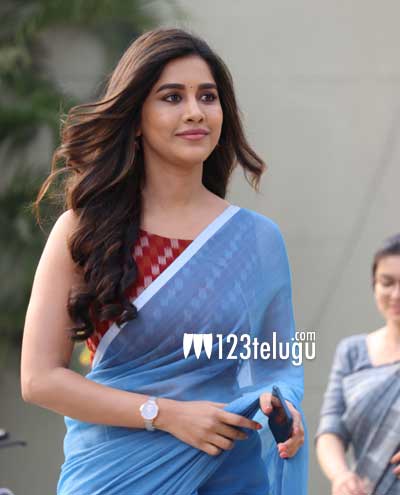 Solo Bratuke So Betteru is gearing up for a big release this 25th of December and promotions are in full swing. On this occasion, we caught up with heroine Nabha Natesh for a detailed interview. Here is the transcript.

What made you choose this film in the first place?

I had worked with director Subbu in Nannu Dochukunduvate and he wrote my role keeping in mind. Ever before the film was set, he called me and narrated my role. My character is quite lively and the contemporary theme of staying single attracted me to the film.

I play a very modern person who is also a girl next door and has good values. When I decide to do something, I don’t change my mind and am stubborn. How a girl like that meets a guy who wants to stay single is the whole story of the film. I had a blast shooting for my role.

Sai Dharam Tej is a sweetheart and has become a very close friend of mine during the shoot of this film. My chemistry with him is going to be the highlight of SBSB. He helped me a lot and has been encouraging me throughout the film. He also has a superb role and impresses many with his performance.

How tense are you with the film’s release?

I am really tense. Even Bollywood films are coming out on OTT and in such a time, ours is the only big film in India that is coming out in the country post the lockdown. In a way, we are showing the way but are also scared about how the audience will accept the film.

Tell us about your director Subbu?

Subbu is a young guy and has a lot of clarity. He is quite clear as to what he wants from his actors. Right from day one to the release time, he has been quite clear. As I worked with him earlier, it was easy for me. I am sure that he will go a long way in his career.

Post lockdown, how difficult was it to shoot the romantic scenes?

Right after the lockdown was lifted, we shot for a song. Luckily, it was a romantic number and mostly montage shots were canned on us. But frankly, I was really scared about going to sets and shoot. Our team needs special mention as they took such good care of us.

How do you see competition from the other heroines?

There should be competition otherwise, the best in us will not come out. As of now, I am playing to my strengths and doing good glam roles that will showcase me in an all-round manner. I am also game for serious films that will surely come to me in the days to come.