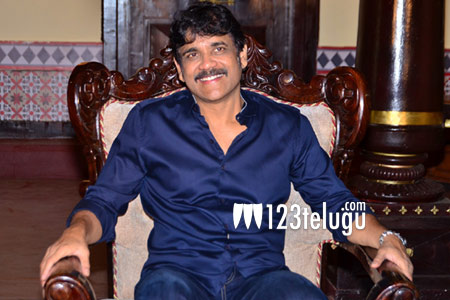 One of Tollywood’s top stars Akkineni Nagarjuna is celebrating his 58th birthday tomorrow. On this occasion, he interacted with media today and revealed a few interesting updates about his upcoming flick, Raju Gari Gadhi2, and his production venture, Hello. Here is the transcript:

Q) Tell us about your upcoming film, Raju Gari Gadhi2?

A) Yeah, the shooting part is almost complete except for some patchwork. Currently, the sound mixing work is going on and we are expecting the first copy by September 2nd week. The film has come out very well and I’m happy that I’ve done a film in the horror-comedy genre, which I haven’t done earlier.

A) I’m playing a mentalist in the film. My character has the power to guess what exactly human mind is thinking about.

A) Omkar is a very focused and dedicated person. He has clarity on each aspect of film making. It was a nice experience working with him.

Q) You are also parallelly producing your son’s film, don’t you feel any pressure?

A) Yeah, definitely they will be some pressure, but at the same time, my love towards them will dominate it. Particularly, Akhil’s film is a bit complicated and as it is a big budget film it needs a lot of involvement in every aspect. But I’m happy with the way the film is shaping up.

Q) Any specific reason for such a long delay in Akhil’s project?

A) As the film is a fresh love story, we always wanted to rope in a new face as the leading lady. That’s the main reason for the delay in the project. We did many auditions and finally zeroed in on Kalyani as the female lead.

A) As of now, I’m not having any such plans. Earlier, we had dubbed five to six films but they didn’t give me fruitful results and I lost confidence. I decided to focus on Telugu alone.

Q) Any updates on Bangarraju ?

A) Even I’m eagerly waiting to do it. Kalyan Krishna had narrated a line, but I didn’t like it. If he narrates a good story, I will do it immediately. But I don’t want it to be a sequel to Soggade Chinni Nayana.