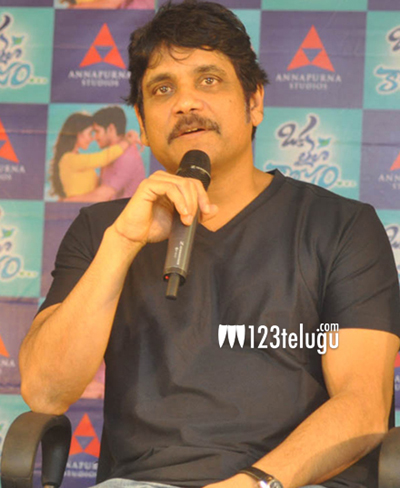 Annapurna Studios have been producing some interesting flicks from the past few years. Oka Laila Kosam is their 25th project and is set for a massive release tomorrow. We caught up with Nagarjuna for a brief interview. Let’s see what he has to say about this Naga Chaitanya and Pooja Hegde starrer.

Have you seen the film. What is your response ?

Yes! I have seen the film and suggested some changes. After making these minor changes, the film looks good and am very confident that it will be a huge success.

What was your reaction when Vijay suggested the title Oka Laila Kosam ?

My first reaction was why ‘Oka Laila Kosam’, which was from a not much successful film of my dad. But when Vijay narrated me the story and the reason behind the title, I was convinced.

This film is high on entertainment, and has a deep emotional side attached to it. Climax of the film will be a huge plus, and Ali’s character will entertain one and all.

Tell us about Naga Chaitanya’s performance in the film ?

With every film, Chaitu is getting more mature as an actor. I feel that it is up to his directors to notice his style, and get the best out of him.

Anup Ruben’s has remixed one of your dad’s famous song. Whose idea was it ?

It was Vijay’s idea to remix the song. Initially, Anup was very reluctant to remix an classic, but as the situation in the film had good scope for such a song, he went ahead and did it.

Did you like Pooja Hegde’s work in the film ?

Yes ! I loved her in the film. I heard so many good things about her during the making of this film, and am very confident that she will become one of the top heroines in the future.

Looks like all your female following is shifting towards Naga Chaitanya these days. What do you have to say ?

Laughs loudly ! I have a cult female following, and would never want it to divert towards anyone. But jokes apart, it is quite good that the girls are loving him so much.

Naga Chaitanya has got a decent image as a lover boy, but why is he not successful as an action hero ?

Even I faced the same problem until I got Shiva. Hopefully, even Naga Chaitanya would get some film which will change his fortunes.