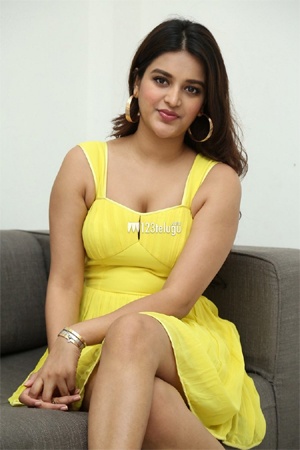 Mahesh Babu’s nephew, Ashok Galla’s debut movie, Hero, is up for a grand release on January 15. On the occasion, we met with the actress Nidhhi Agerwal for a brief interview. Here is the transcript.

How did you get the chance in Hero?

Director Sriram Adittya called me for a narration. After he narrated me the Hero’s story, I immediately agreed to do this film as I felt the story is commercial and different also. The movie also offers dark comedy apart from other commercial elements. So, I okayed it without any second thought.

Tell us about your role in Hero?

My character’s name in the movie is Subbu, a Veterinary doctor. Senior actor Jagapathi Babu played my father’s role. I have many good scenes with senior actors, Jagapathi Babu, Naresh and others. The family drama has a good scope for group scenes and situational comedy.

Ashok is really a good performer and he knows everything. He used to come prepared onto the sets. While working with him, I felt so much comfort and in the meantime, I also wanted him to be comfortable with me as he is a newcomer. Besides, I never advised him of anything except a few tips.

Do you think is it time for experiments?

I don’t think so much and I always go with the flow. It doesn’t matter to me if the movie has an established star or newbie. If the respective directors have faith in me and my performance, they will cast me for sure. I always wanted to give a better performance than that of my previous movie.

Any dream roles to play?

I wanted to do an out and out action film. In Pawan Kalyan’s Hari Hara Veera Mallu I got an opportunity to fulfil my desire by doing small stunts. To say about HHVM, I am playing my career’s best role ever in this movie.

Working experience with the director?

One thing I liked about Sriram Adittya is he is highly talented and doesn’t give up until he gets exactly what he wants.

Currently, I am busy shooting for Hari Hara Veera Mallu. My upcoming Tamil movie with Udhayanidhi Stalin is up for release. Besides, I have a couple of movies in Tamil and Hindi.

I didn’t get any OTT offers yet but I am ready to act in OTT originals if anyone comes to me with a promising script.