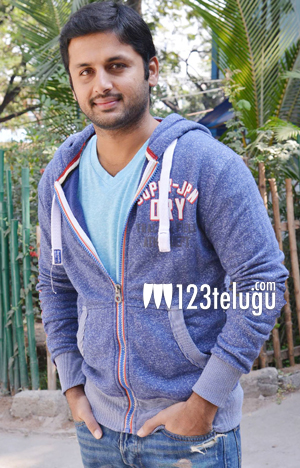 Young hero Nithin, is on a all time career high with three back to back hits. He is now ready with his latest film Chinnadana Nikosam. On the eve of the film’s release, we caught up with Nithin for a detailed interview. Let’s see what he has to say.

A) This is a feel good love story which will be in typical Karunakaran style. Climax of the film has a surprise element and will be liked by one and all.

Q) How was it working with Karunakaran ?

A) Right from the beginning of my career, I always wanted to work with him. His love stories are unique and the way he designs his characters is quite interesting. I had a lovely time working with him and am very eager to see my film’s response.

Q) Whose choice was Mishti Chakravarthy. How was it working with her ?

A) We always wanted a new face for this film and Karunakaran selected Mishti after watching her Hindi film Kaanchi. He has presented her in a stunning manner, and she has also done a wonderful job in the film.

Q) What was the reason behind producing Akhil’s debut film ?

A) Our family shares a very close bond with the Akkineni’s. Even in the past, we had together produced Sumanth’s Yuvakudu. As we had a interesting story that would perfectly suit Akhil, we approached Nagarjuna garu and that’s how the project materialized.

Q) What is the status on Courier Boy Kalyan ?

A) Shooting of the Telugu version is completed, but the Tamil version is still in its filming phase. Once the shoot is done, we will come up with the release date soon.

Q) Are you doing a film with writer Harshvardhan ?

A) After the success of Gundejari Gallatayyinde, I asked Harsh to prepare a story for me. Discussions are going on and if I like his story, I would definitely work with him in 2015.

Q) You are continuously doing love stories. Aren’t you bored ?

A) Even I am aware of this fact, and will do something completely different in my next film.