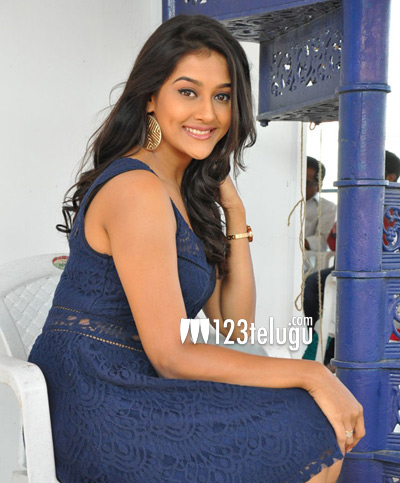 Pooja Jhaveri who got introduced to Telugu films with Bham Bolenath is coming up with her new film Dwaraka. On this occasion , we caught up with her for a detailed interview. Here is the transcript.

I was born in Gujarat and brought up in Mumbai. Before coming into films, I acted in Ad commercials.

Q) What did you do before entering the Ad world ?

I studied graphic designing and worked on it for some time. Later,I worked as a choreographer for Bollywood films for a while.

Q) How many films you acted in till date?

In Telugu, I acted in Bham Bolenath, Right Right , L7 till date. Dwaraka is my fourth Telugu film. In Tamil, I acted with Dhanush in Thodari and right now am doing one more Tamil film.

Q) How is Dwaraka film going to be?

How a bad guy transforms into a Swamiji is the entire story of Dwaraka. The entire film runs in the Dwaraka backdrop and has come out well.

Q) About your character in the film ?

I play a tough girl’s role who quickly falls in love with the hero. I have worked hard for the film and hope that I will get better offers after the movie releases.

Vijay Devarakonda is a good actor. He signed this film before Pellichoopulu got released and I was very comfortable working with him.

Q) Does your role has any scope for acting in this film?

My role has scope for both acting and glamor. In most of the movie, I will be seen in half saree.

Q) What kind of roles you want to do in future?

I am ready to do all kinds of roles .But my dream is to act in a mythological and historical films.