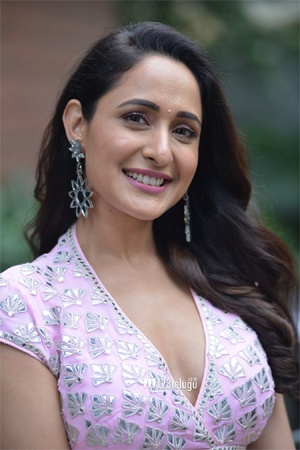 Akhanda is up for a release soon and on this occasion, we caught up with heroine Pragya Jaiswal for a brief interview. Here is the transcript?

I was waiting for the right opportunity to make my comeback in Telugu. As I had already worked with Boyapati garu, he called and offered me the role. Once I heard it, there was no looking back.

Working with the likes of Balakrishna?

I had met him only once and that too at an award function. So, I was a bit scared as to how he would react. From the day I landed on the sets to the last day, Bala sir has only helped me big time. He is a kid at heart and makes people comfortable.

I play an IAS officer in the film and my character drives the film. It was a hard role and required a lot of composure. I worked very hard on the role and hope the critics and audience would like it.

About Boyapati’s work in the film?

He has done an amazing job with the film. The way he has designed the story itself is new. Bala sir will be showcased in a new manner and the action sequences will blow your mind. Boyapati sir has taken things to another level with this film.

Your chemistry with Balakrishna?

It has come out quite well. One song which out had also clicked well. There is one more mass song and we share a sizzling chemistry in it and I am sure that the audience will love our bonding.

About your dull career so far?

Yes, it has been quite some time since I made my debut. I was stuck in an image for the longest time but I am open to all sorts of roles and Akhanda will be that change in my career.