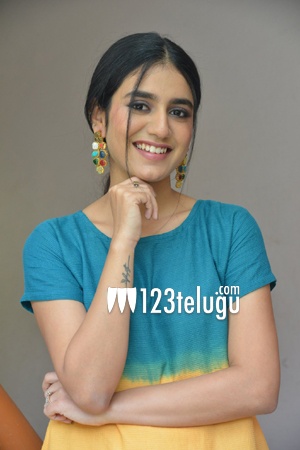 Teja Sajja’s Ishq is all set to release this 30th July. On this occasion, we caught up with the heroine Priya Varrier for a brief interview. Here is the transcript.

Generally, it takes at least two months and a lot of discussions. But for this film, I got a call just two days before the shoot. As I had watched the original, I loved the script and said yes to the film and landed directly on the sets.

There was nothing much to prepare and I went according to my director. I did not want to repeat what was done in the original. I approached the role through my sensibilities and it was quite easy.

Malayalam cinema is artistic. How comfortable are you doing Telugu commercial films?

I feel that the Telugu industry has a mix of both commercial and artistic. I would love to do all kinds of films in Telugu and have only received a lot of warmth from the audience. In a way, I am more popular here than in Kerala.

How do you pick your films?

For me, the story is quite important and then comes anything. If the story is strong, I don’t mind doing even a small role in the project. I feel that a good story is the driving force of any film.

Why didn’t you utilize the popularity that you received with the wink click that went viral?

Once the film release, I got so many offers from all over the country. But as I was studying, I couldn’t accept any film. I missed out on some big projects in Malayalam as well. Also, when the time is right, things will come to you, and I believe good things are ahead of me.

Teja is one hyper guy who keeps the sets in splits. He is active and helped me with the language and supported me a lot. His role in the film is tough but he has done a good job.

In Malayalam, I have not signed any film. People expect a good female-oriented film so I am waiting for the opportunity. In Hindi, I am having two films that are on sets as of now. In Telugu, I am doing a film with Sundeep Kishan and have a few offers which I will finalize soon.