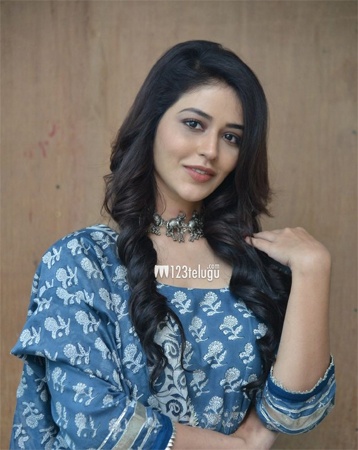 Gamanam directed by debutante Sujana Rao is releasing on 10th December. On the occasion, we met with actress Priyanka Jawalkar for a brief interview. Here is the transcript.

How do you get the opportunity in Gamanam?
Producer Gnana Shekar VS sir approached me to do the role of a Muslim girl. Post a test look, he roped me in Gamanam to play Zara, who talks less and expresses more with eyes. I felt it was so tough to do during the shoot. Besides, I accepted the offer as soon as I heard that Ilaiyaraaja sir is the music director. I don’t want to miss the opportunity to work with him.

How did you prepare for the role?
To perform my character well, I watched Nithya Menen’s Malli Malli Idhi Rani Roju. It took me 4 days to understand my character in Gamanam. In my childhood, many Muslim families used to live in our neighbourhood. I know how they used to behave and that helped me to do this role with ease.

Your experience with the director and producer?
Sujana is always supportive. As the director is a woman, I connected with her easily and became friends in no time. I also used to share my problems with her during the shoot. Gnana Shekar sir gives so much comfort to the actors and he cares for everyone.

Tell us about Gamanam
I got a great character to perform in Gamanam. Many people have thought that I am only suitable for commercial films but they will get to know that I can also do off-beat films, once they see me in this film. The movie has shades of Vedam. I liked it immediately after Sujana narrated my role.

Working experiences with co-actors
I missed working with Shiva Kandukuri in Choosi Choodangane film and Gamanam made it possible. We are close friends.

Charu Haasan sir is a great actor and who am I to talk about his performance? He is a good man. While working with him, I am so cautious because I don’t want to trouble him by going for a second take.

About future projects
I am so afraid to do selected movies and also worried to face flops by accepting every movie that comes in my path. So, I accept films only if I like the story. I would like to work with all the heroes. I wanted to do a love story.

I sometimes feel that I didn’t properly use the success of Taxiwala. But, we can’t decide what will happen next. And I never thought that SR Kalyana Mandapam and Thimmarusu became hits amid the Corona scare. I also think that Gamanam will do well at the box office.