Interview : Rajasekhar- If the film is good returns will automatically come
Published on Oct 31, 2017 11:00 pm IST 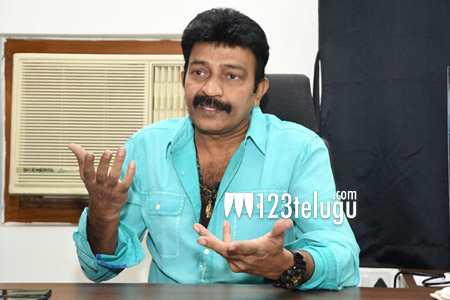 Garuda Vega is a do or die film for Rajasekhar. On the eve of film’s release, we caught up with him for a detailed interview. Here is the transcript.

Garuda Vega is the most expensive film os my career and I am super confident that the film will be a good hit at the box office. I have complete belief on the director as he has showcased the film in a racy manner with a lot of action.

I play an investigative officer with the NIA forces. I have a family and Pooja Kumar plays my life. How my personal life gets involved with my professional and how I get assigned to the deadliest mission is the whole film all about.

What new are you going to showcase in Garuda Vega?

My role will be quite new. In all these years, I have played only emotional roles but in Garuda Vega, I will look and behave quite realistically and go with the film’s flow.

On what belief did you put so much budget on the film?

I completely believed in Praveen Sattaru’s story. Initially, we planned to make this film with close to 7 crores. But as days passed by, the weight in the story convinced us to go for higher budgets. I feel that if the film is good, the returns will be equally high.

How did Praveen Sattaru approach you?

I was going through a very tough time in my career as everyone was offering me films only as a character artist. In such a situation, Praveen came in as a blessing in disguise and offered me this film.

Praveen came with a complete bound script to me. I liked the film in the first meeting itself but always had a doubt as to how will he handle such a huge film. But all my doubts were cleared on the first day itself as Praveen started showcasing the film in a stunning manner.