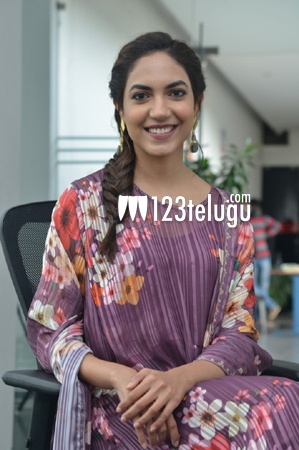 Varudu Kavalenu is up for a release this Friday. On this occasion, we caught up with the film’s heroine Ritu Varma for a detailed interview. Here is the transcript.

Your reaction to having back-to-back releases?

I am elated. This is my third film of the year. It started with Ninnila Ninnila and Tuck Jagadish. Now, we are ready with Varudu Kavalenu.

What attracted you to this role?

I love challenges and feel that the best in me comes out when I do such strong female-oriented roles. Bhumi is one such role that had everything. It is modern, has family values, and is stubborn as well. So, there was no chance of leaving it.

Is Varudu Kavalenu a female-centric film?

Even, I am hearing that a lot. But trust me our film is not a female-centric film. Shourya has a huge role and just because the heroine’s role is strong, the hero is not sidelined. Varudu Kavalenu is a proper love story.

Working with the likes of Naga Shourya?

He is one of the most dedicated actors I have worked with. He is always on time, works on his character, and is quite strict about the way he maintains his body. We look adorable together and our chemistry is the biggest asset of the film.

For the first time, you have done a dance number. Tell us about that?

I always wanted a hit song for myself. Right from the training to the shoot, I was so tense and had tough times during the shoot as well. But the director Lakshmi supported me a lot.

Working with a female director?

She is very clear and has written quite a strong role for me. Lakhsmi knows the emotions of my character perfectly and showcased me in a new avatar. In a way, you will see me as a complete performer in this film.

I love period films and would love to do one such film before I retire. I would love to dress up and see myself in a grand manner on the big screen. Hopefully, I get such a role soon.

I started shooting a Tamil film with Ashok Selvan. In Telugu, I am yet to sign a film to date.