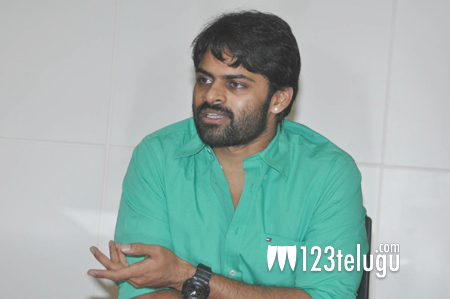 Young hero Sai Dharam Tej, is beaming with pride as his new film Pilla Nuvvu Leni Jeevitham has hit the bulls eye. On the occasion of the film’s success we caught up with Teju for a brief interview. Let’s see what he has to say.

Q) Finally your film has released. How do you feel ?

I feel quite relieved and had a very good night’s sleep after many days.

Q) What was the first compliment that you received for this film ?

Chiranjeevi garu saw the film and said that I did a good job and blessed me for my future.

Q) When did you decide to get into films ?

After I finished my MBA, I couldn’t see my self in a 9 to 5 job. That is when I decided to become an actor. I told my uncle Pawan Kalyan about my aspirations and with the help of my other family members I started training to get into films.

Q) What kind of training did you undergo ?

I was a very fat guy and weighed nearly 130 kilos. I reduced my weight first and then learnt acting from Satyanand and Barry John film institutes.

I used play cricket in Manchu Manoj’s office and one day Y V S Chowdary spotted me there. He asked me whether I would do a film with him. I spoke to my family and the project went on floors.

Q) Don’t you feel disappointed as the film has not yet released ?

I feel very let down and am hugely disappointed but nothing is in my hands. But with the support of my family and friends, I am facing these difficult situations. I can say only one thing that whenever Rey releases it will only bring me good name.

Q) What kind of response are you getting for PNJ ?

Firstly, I am very relieved that I was able to sustain to the standard set by my family members. I watched the film with the audience and the response that I am getting is amazing. I became emotional watching myself on screen.

Q) How was it working with Jagapathi Babu ?

Initially, I shot the film with Sri Hari garu first. But after his sudden death everything went haywire. Only after Jagapathi Babu came into the picture the project got a new life. I had an amazing time working with him and he treated me like his own son.

Q) Does your family help you in selecting your films ?

I myself take care of the films that I do. I read my own scripts and decide about the project.

Q) Tell us about your future projects ?

My next project with Harish Shankar will go on floors soon. I am currently reading some scripts and will finalize them soon.