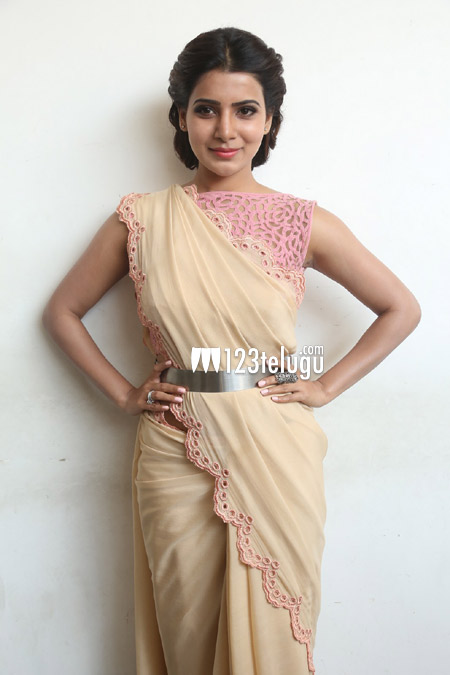 Manam has been one of the biggest and prestigious films in Tollywood. The film has released worldwide today, and we caught up with one of the female leads in Samantha, for a detailed interview. Let’s see what she has to say.

A) The script of Manam was so strong that even though the Akkineni family would not have starred in the film, I would have gone ahead and done it. The entire Akkineni family making this film, is just a icing on the cake.

Q) Tell us about your role in Manam ?

A) I have one of the best roles in the film. I have played two different roles in the film which are quite unique. While one role is quite bubbly, the other is on a serious note. I would like to thank the director Vikram Kumar for choosing me for a prestigious film like Manam.

Q) How was it working with the legendary ANR ?

A) I will always cherish those moments all my life. The first time I met him was during the success meet of Ye Maya Chesyave. I still remember the compliments he gave me for my role. Even tough I had only a few scenes with him in Manam, I had a great time working with him. His sense of humor is just out of the world.

Q) Tell us something about the music of this film ?

A) I consider Anup Rubens as the king of melodies. My favorite song in the entire film is the mother song.

Q) How was it working with the director Vikram kumar ?

A) Vikram is such a demanding director. He is adamant, and will wait until you give the perfect shot.

Q) Who has done a better job among the entire ANR family according to you ?

A) Rather than speaking who did the best role in the film, the chemistry that the three of them shared, is amazing. When you watch all three of them in a single frame, it is such an amazing feeling.

Q) What kind of roles attract you, glamor or performance oriented ?

A) It is an obvious answer. Anyone would love to do a performance oriented role.

Q) How was it working with your other co-star Shreya ?

A) Shreya also has a wonderful role in the film. She looks gorgeous and will be appreciated highly for her acting in this film.

Q) Which is your best role till date ?

A) I am very critical about myself and do not easily like my performances. But the role I did in ‘Yeto Vellipoindi Manasu’ was the probably the best role in my career.