Interview : Samantha – I took training in Boxing and Kickboxing for Yashoda
Published on Nov 8, 2022 3:45 pm IST 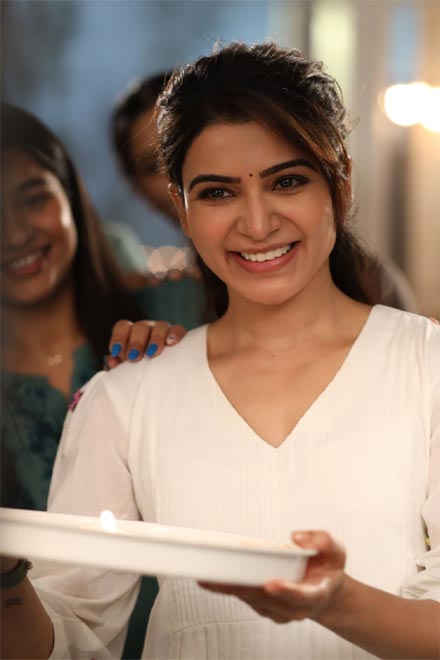 Star actress Samantha’s upcoming film Yashoda is scheduled for a grand release on November 11th. Unni Mukundan, Varalaxmi Sarathkumar, and Rao Ramesh play pivotal roles in this action thriller. Produced by Sri Devi Movies, the movie is helmed by Hari and Harish. Mani Sharma is the music composer. Ahead of the release, we had a brief interaction with Samantha. Here is the transcript.

What’s your reaction about the fantastic response to the film’s trailer?

I am very excited, and also I am a bit nervous. Generally, the things we show in teasers and trailers are accurate and precise glimpses into the movie, which has been received well. I have a positive feeling that the audience will like the film too.

Surrogacy has become very popular recently. What’s your opinion on it?

I personally don’t have a firm opinion on surrogacy. For people who want to be parents, it is a sort of solution or hope. Simply put, that’s the thought I have about it.

You did films in different genres. How excited were you to do Yashoda?

I keep looking for different roles whenever I am listening to stories. Before Yashoda, I can say U-Turn is something I have done close to this genre. I can assure you that Yashoda would be completely different. I enjoy being part of action sequences and Raji in Family Man was the first time I did the action.

Did you take any special training for Yashoda?

Stunt director Yannick Ben and I previously worked for Family Man. I took training in Boxing and Kickboxing for Yashoda. Practice is a must for any action scene, and the fight sequences, particularly in Yashoda, were designed to suit the story. Also, we made sure they looked real.

How was the support given by producer Sivalenka Krishna Prasad Garu?

The producer constructed a vast set because the team didn’t find any apt spot for the shoot. The team considered a few hospitals and restaurants but weren’t satisfied. Krishna Prasad Garu made the film look rich and grand.

Was the project started as PAN Indian film, or did it change during the due course of the shoot?

The story has got great emotions that can engage the audience throughout. The film had potential, and we knew it from the very beginning. As the film shaped up nicely and as the movie’s emotional core point is easily connectable, we also went ahead with other languages.

Apart from your character, which other role did you like the most?

For me, it is Varalaxmi Sarthkumar’s character. Her character has an incredible arc, and If I reveal further, it would be a spoiler. But, after watching the film, you would get to know by yourself why her character was more important.