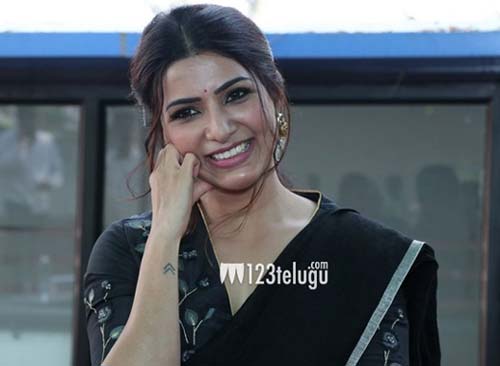 Samantha is busy promoting her latest film Jaanu which is up for a release on the 7th of this month. We caught up with her for a detailed interview and here is the transcript.

What was the most difficult part of shooting for this film?

The film is based on only two characters and everything needed to be in sync. Generally, there are a lot of padding artists in other films but things are different in this film. So, it was quite a daunting task shooting for this film.

Did you meet Trisha after you decided to act in the remake?

No, I never met her. But the day I saw the film, I fell in awe of her performance. Everyone spoke about Vijay Sethupathi as the main highlight but for me, Trisha was the winner in the film with her standout performance.

Initially, I avoided Dil Raju a lot after knowing that he wanted to cast me. Reluctantly, I met him because I clearly knew that once he starts asking me to do the film, I will not be able to say no to him. That is how I accepted the film and took it as a challenge.

How do you rate this performance in Jaanu?

I have given my heart and soul for this film and feel that this is my best performance to date in my career and hope that the audience will feel the same when the film releases.

How will you cope with the comparisons that will arise after seeing the film?

I have given my own spin to this role and did not try to copy Trisha. I feel that original is always good but at the same time feel that I have given my best and will make sure that the audience forgets Trisha when they watch me on screen.

Sharwa’s contribution to your performance in the film?

If not for Sharwa, this film would have not been possible at all. I couldn’t have imagined other than Sharwa in the role. We pushed each other to do better and always looked at each other for approval of several scenes. I feel that our chemistry will work wonders for the film.

You have upped your game in the last few years. How do you feel?

I feel that the heroine’s career is very short and one has to make a name for herself in a limited time she has. I never worked for money and only ran after fame. The money came automatically and now directors are coming to me with some great projects and I am very happy with my career.