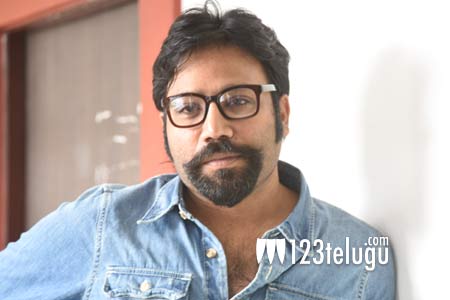 Within less time, Arjun Reddy has created a superb buzz for itself. The film is up for a release this Friday and on this occasion, we caught up with the film’s director Sandeep Reddy for a brief interview. Let’s see what he has to say.

I am born and brought up in Warangal. After finishing my graduation in physiotherapy, I moved to Australia to do a filmmaking course. Post that I worked in the direction department of Nagarjuna’s film KD and also was involved in the script part of Malli Malli Idi Rani Roju.

What is Arjun Reddy all about?

The film is an emotional journey of a man called Arjun Reddy. What happens to him after his break up and how he deals with the after effects is the whole story about. In one way, you can say that Arjun Reddy is a celebration of sadness. I have taken a lot of inspiration from my real life experiences and have written the script.

I was supposed to do this film with Sharwanand but things did not work out with him. Then, I happened to meet Vijay and narrated him the story. He was super excited and agreed to do the workshop before going on to the sets. Vijay has done a mindblowing job and the audience will get mesmerized with his standout performance in the film.

The posters have created a lot of controversies. I just showcased the passion between the lead pair but everyone is looking at it in a derogatory way. The censor did have a problem with few cuss words which we muted. My film is a mature film which is targeted at the youth and that is why received an ‘A’ certificate from the censor board.

Did you ever imagine this kind of hype?

No! we only felt that the teaser will surely strike a chord but not to this level. The youth is loving the trailer and they themselves are promoting it on a mouth to mouth basis.

Two scripts are ready and I have already received a call from a star hero to direct it. I will reveal it all after the release of Arjun Reddy.