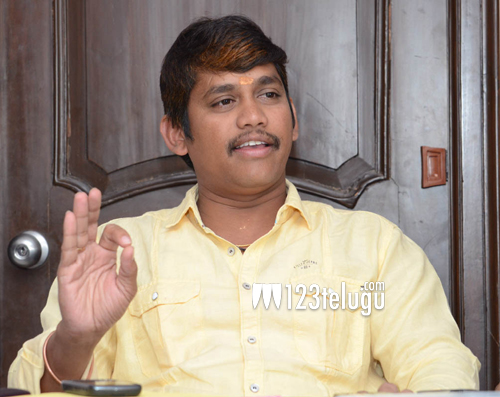 Director Santosh Srinivas is a busy man these days. He is giving finishing touches to the NTR starrer Rabhasa, which is all set to hit the screens on August 14. On the eve of his birthday, we caught up with this young director for a detailed interview. Let’s see what he has to say.

Q) What is special about Rabhasa ?

Rabhasa is a total family entertainer, with a bit of sister sentiment attached to it. There will also be a huge does of comedy and fun elements in the film.

NTR has quite a special role in this film. Every mother and sister will deeply associate with his role. You will see a new dimension in NTR’s acting in this film.

Q) Did you make any changes to the script once NTR okayed the film ?

Yes! once NTR okayed the film, I took some 20 days off, and fine tuned the script, to suit his image, and added some commercial elements as well.

Q) Why is there a major delay in this films release ?

As you might know by now, I had fallen sick with severe health problems, because of which there was a delay by two months. Even though this happened, we managed to complete this film in 135 days only.

Q) There were huge rumours that Koratala Shiva directed some parts of Rabhasa?

Once again, the are just vague rumors which make no sense and have no reality.

Q) Reports reveal that there is huge comedy in this film. What do you have to say about this ?

Yes ! the second half of the film will be hilarious. NTR and Brahmanandam’s track will be a special highlight to the film.

Q) How was it working with Bellamkonda Srinivas ?

He is a tough task master and has a terrific judgement about the story line. It is very tough to impress him with the scripts, but once he likes it, he gives the director complete freedom with the project.

I am ready with next film titled Tikka Regithe. Once I am done with Rabhasa, I will officially announce this film.

Q) So finally, what can NTR fans expect from Rabhasa ?

NTR fans will get everything they look forward in their heroes film. Rabhasa has huge comedy, family emotions and terrific fights and dances which will surely entertain everyone.