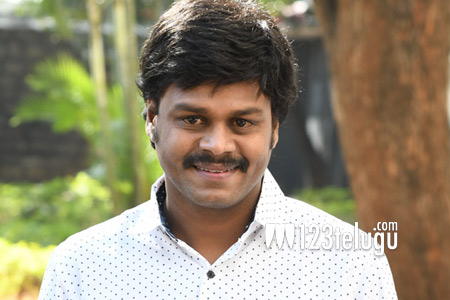 Comedian Sapthagiri, who is known for his unique comedy timing is getting introduced as a hero with Sapthagiri Express which releases tomorrow. On this occasion, we caught up with him for a brief chit chat. Here is the transcript.

Q) Did you ever imagine that you will become a hero one day ?

No ! I actually wanted to become a director but Bommarillu Bhaskar made an actor. Prema Katha Chitram gave me a big break and made me a star comedian. Now, luckily, I got an opportunity to become a hero.

Q) What made you accept the hero’s role ?

I was bored of doing the same kind of comedy roles and thought it would be if I attempt a central character which is quite challenging.

I play the role of a police constable who desperately wants to become an actor as it is his father’s wish to see him as an IAS officer.

Q) How difficult was it to give away your title to Pawan Kalyan?

Yes, we faced some problems initially and thought about it for a long time. But as a respect towards the star hero, we happily gave it to him.

Q) Any reason for not selling the movie to distributors and going for an own release?

As this is was our producer’s first movie and that too an experiment one, he didn’t want to take any risk and release it on his own.

Q) Will you continue as a hero in the future ?

I have no such ideas. Right now, am doing as a comedian in Naga Chaitanya and Sharwanand movies.

Q) Can we see you as a director in the future?

I came here to become a director so definitely, I will direct a movie one day.