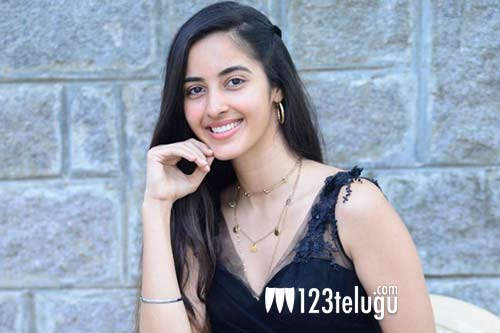 Dirty Hari is a film that has caught the imagination of many. It is a film that is being made by MS Raju and will be out on the 18th of this month. On this occasion, we caught up with the film’s heroine Simrat Kaur for a detailed chat. Here is the transcript.

I had already done a Telugu film called Prematho Mee Karthik. MS Raju Garu happened to see it and called me to Hyderabad. Post the call, I found out who MS Raju was and felt very happy that such a big producer has approached me. I came down to Hyderabad and bagged the role eventually after a few auditions.

I play the role of Jasmine who is quite confident and bold in her character. I played a very homely girl in my first film and this role is completely opposite to it and was quite challenging to portray as it had negative shades as well. So, I took this up as a challenge and did the movie.

Though he is a senior producer, he is quite young at heart and made a lovely and youthful film which will surely connect to the younger generation. The manner in which he explained me scenes, made me comfortable while doing bold scenes, and brought out superb performance from me was very good. Also, I learned a lot in my personal life by observing him.

How did your family react to such a bold film?

Post my debut films, I wanted to quit films as my studies were obstructed. Also, I did not get big offers. Seeing all this, I decided to take a break and complete my studies. MS Raju came to me with this subject. I didn’t know how would my parents react to such subjects. But such things have become a part and parcel of the game now and everything is done so professionally. So, U had good support from my family.

What kind of films do you want to do in your career?

As of now, I am eagerly looking forward to the release of my film. I am waiting for some good offers in the south and hopefully will get something interesting in the days to come.