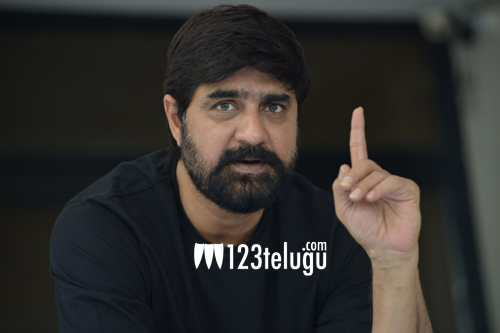 Srikanth is ready with one more film called Ide Maa Katha. The film will be out tomorrow and on this occasion, we caught up with him for a brief interview. Here is the transcript.

Director Guru came to with this unique script which had good youthful elements as well. The element of bike riding made get attracted even more and I said yes to the film right away.

I play one of the four key characters in the film. Each of them has a backstory and how my character is crucial and brings a twist to the plot is the whole story. When I was young, I used to travel a lot by bike and now, I enjoyed this new experience completely.

Working with the likes of Bhumika?

We both have been in the industry for a long time now but I never got work with her to date. But for this film, I got a chance and loved every moment of it. Bhumika is a seasoned actress and her role is also quite good in the film.

About your son, Roshan’s film debut?

He is all set with Pelli SandaD which has come out well. I actually wanted him to debut after three years but he got a good chance so I could not say no. Not many know that Roshan has worked for Salman Khan’s Dabangg 3 as an AD and that experience has surely helped him.

About your role in Balayya’s Akhanda?

I play a full-fledged villain in that film and will surely shock you guys. Right from the getup to body language, everything is going to be quite new. I am eagerly looking forward to the release of the film.

Working with the likes of Balayya?

I have worked with him earlier as well. In this film, I am taking on him big time. In fact, Balayya Babu is quite impressed with my performance and complimented me a lot.