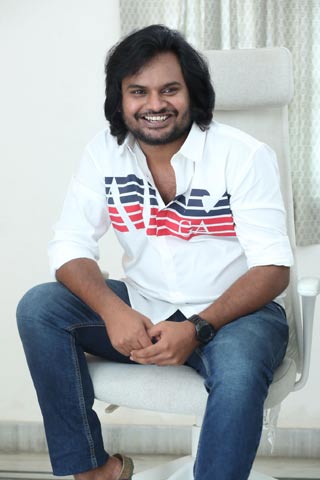 Hero marks the debut of Ashok Galla in films. On this occasion, we caught up with the director Sriram Aditya for a detailed interview. Here is the transcript.

Ashok Galla’s mom, Padmavati Garu called me one day and introduced me to Ashok. After multiple meetings, I came to know Ashok is going to debut in films and I was given the opportunity to launch him.

What kind of film is HERO?

It is a full-on entertainer. The runtime of the film is 2 hours 10 minutes and I can guarantee that you will be laughing nonstop for at least two hours straight. There is a new and novel point which we have kept as a surprise so far. You will only know when you watch the film.

What’s the whole cowboy angle in the film?

It is the starting sequence in the film and I request everyone not to miss the beginning as it is quite key in the movie. As Ashok comes from Krishna Garu’s family, donning a cowboy getup is an obvious choice.

Working with the debutante Ashok Galla?

Ashok is quite clear in what he is doing. He has worked so hard for his debut and went all out with his performance. As the film is filled with comedy, I asked him to watch comedy films of all big stars to get a hang of it.

Tell us about the producers Padmavathi Galla?

Krishna Garu’s family has been in the industry for a long time. As it is her first film, she was there on the sets on a daily basis and gave whatever was best for the film.

You have made four films so far. How did you rate your career?

So far, I have done what I liked and tried a bit of experimentation as well. Even in the future, I will make films that will be experimental and also be commercial at the same time.

Finally, what was the biggest challenge to launch a debutante?

It was not a challenge but a good opportunity to showcase my talent. I have made this film on a very commercial note but yet the story and treatment are very different. Ashok fits the bill perfectly and he will rock the industry.