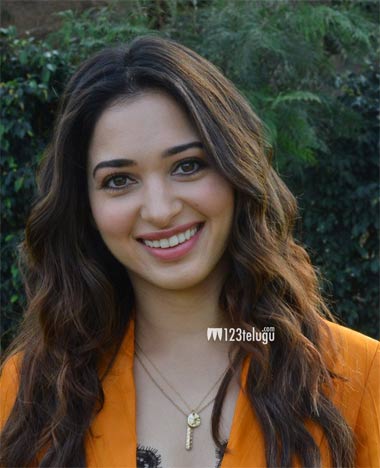 Milky beauty, Tamannah is back with her new film Next Yenti which is directed by Hindi director Kunal Kohli. As the film is ready for a release soon, we caught up with Tamannah for a detailed interview. Here is the transcript.

Your reaction when people say your career is nearing its end?

I take it in the right spirit and see what can I do to get better in my career. Whenever the press has written me off, I have only bounced back in style and worked even harder.

What is Next Yenti all about?

It’s about the modern day story of a girl who goes through different phases in life before she finds the right man. The movie is a modern take on relationships and I feel that a bold film like this is coming out at the right moment in Tollywood which is exploring so many interesting genres.

Describe your role for us?

I play a girl called Tammy who is very modern in her thoughts and shares a very close relationship with her father played by Sarath Babu. She goes through different phases of love in her life and acting in such a role was a bit difficult for me. This role is quite nearer to my heart as I also have the same ideologies in life.

I had a great time working with Sundeep Kishan. Our chemistry is quite good in the film and he has done a superb job in his role. Coming to Navdeep, it is good to see that he is trying different roles in his career and I feel that is how an actor should work to improve his graph in acting.

What difficulties did you face while working with a Hindi director like Kunal?

At first, I felt a bit surprised when Kunal narrated me this script and said that it will be a Telugu film. Once I heard the story, I felt that the story was universal and would work in every language. Kunal was very clear in is approach and had a good team of writers who helped him with the Telugu lines.

Tell us about That is Mahalakshmi?

I play this girl from Rajahmundhry who is very childish and has so many dreams in her heart. The role which I am playing in Next Yenti is drastically different from That is Mahalakshmi which will come out in 2019.