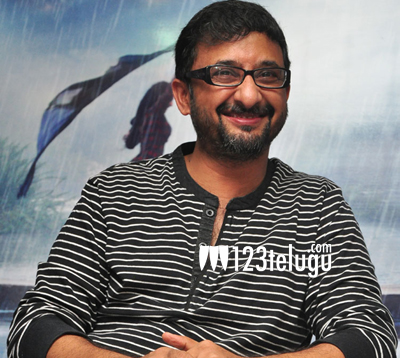 What ever maverick director Teja does becomes a sensation. After a brief gap, he is back with yet another romantic entertainer Hora Hori. On the eve of the film’s release, we caught up with him for a very interesting interview. Here is the transcript.

Q) Tell us about Hora Hori ?

It is a cute love story with the caption ‘fight for love’. We have shot this film with complete new comers and in a quick span of 54 days with limited budget. Personally for me, it has become a fight for success in the industry.

Q) Tell us about the making of the film ?

We shot this film in a place called Agumbe which has most rainfall in India. At least 80 % of the film has a rainfall backdrop and it was quite difficult for us to shoot in these locations. We had a limited crew of 20 members and every body did their bit and completed the film on time.

Q) The visuals look stunning. Tell us about the technical aspects of the film ?

For the first time in India, we have used the 4th wall technique for this film. Such techniques are mostly used in Hollywood and create a superb illusion and allow the audience to enjoy the proceedings in different angles. Also, I have increased the width of the film which will look quite new on screen.

Q) Tell us about the other departments of this project ?

Generally, there are 24 crafts who work for the film. But for Hora Hori, only 5 to 6 crafts worked on the project. This was done to reduce the production cost.

Q) Why did you compromise so much on the budget ?

I am desperately looking to give a hit and don’t have the freedom of asking my producers for huge amounts. Moreover, I don’t see the need of using up so much budgets for simple films like these.

Q) What is the duration of the film ?

Laughs ! This is one of the most painful questions which everyone is asking these days. Duration of the film has became the new age disease in Tollywood currently. How can you make a film in a particular duration. If the story demands, you are bound to make the film lengthier. I feel that if your story is gripping, audience will surely watch however lengthier the film is.

Q) Tell us about the heroine Daksha. She has become quite popular ?

She has done a wonderful job in the film and worked very hard on her performance. She also dubbed on her won and showed complete dedication towards the craft.

Q) Composer Kalyan Koduri revealed that he had a tough time working with you. Tell us about that ?

See ! I am a complete workaholic and my family and their problems are secondary for me. I put cinema in the first place and expect everyone to be in sync with me. That is where I develop creative differences with everyone. What ever torture I put others into is only for the betterment of the film.

Q) Why aren’t you working with big stars ?

I am not comfortable with the baggage that these stars bring on to the set. Handling them is a painful process and I don’t have the patience to cope up with it.

I am planning for a science fiction film which is currently in its scripting stages.

Q) How confident are you about Hora Hori ?

Audience should decide for themselves. All those who have seen the film ended up liking it and I hope it will entertain the audience decently.