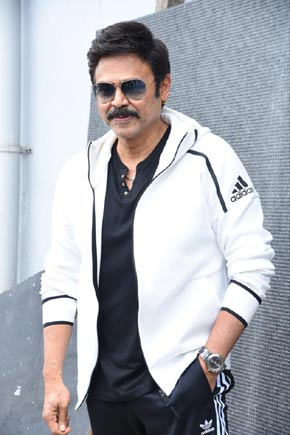 Drishyam 2 is up for a release on Amazon Prime this 24th. On this occasion, we met Venkatesh for a detailed interview. Here is the transcript.

How is Drishyam 2 going to be?

As we all know that Ram Babu can go to any length to save his family. The story starts where the first part ended. How Ram Babu continues to face challenges and how he uses new techniques to come out of his problems will be quite thrilling.

Have you made any changes to the original?

Yes, we made some key changes. I showed the film to many of my close sources and all those who have not seen the first part will also connect to the sequel. As a film, you will have an edge-of-the-seat thriller to watch.

About the film’s OTT release?

The decision about the OTT release was taken during the Covid time. I also feel families are still thinking to come to the theaters and Dirshyam 2 will be a perfect watch for such an audience. I also know that fans are upset but my next few films will be big theatrical releases.

How difficult was it to portray Mohan Lal’s role once again?

Reprising Mohan Lal’s role was so difficult in the first part as well. Now, with this sequel, things are quite tight and there is no room for negligence. I have worked hard and will showcase some of my best works in this role.

Did you have any discussions for Drishyam 3 as well?

Yes, we had but my director says that it will take at least close to three years before he thinks of something new for the third part.

Why are you only choosing remakes?

What’s wrong with choosing remakes? I don’t think so much and keep doing films back to back. I see the subject and look at what the character gives me to perform. But in the days to come, I am doing films with pretty young directors.

Tell us about F3’s progress?

F3 will be mad fun and the audience will have a blast. My role, the script, and the way there is all-around entertainment, the film will be a sure-shot hit. The climax is being shot as of now and we are planning a summer release.

As of now, several young directors are scripting new-age films for me. I have not signed anything as of yet and once I do, will let all of you know. For now, I am busy with the Netflix project with Rana.