Interview : Vishal – In Abhimanyudu, we mainly focused on the Digital India concept
Published on May 26, 2018 7:13 pm IST 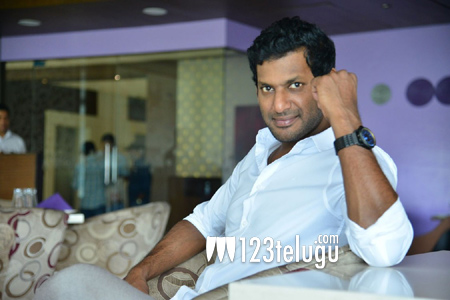 Hero Vishal’s latest outing, Irumbu Thirai, is successfully running in Tamil Nadu. The film’s Telugu dubbed version, Abhimanyudu, is slated for a June 1st release. On this occasion, we caught up with him for an interview. Here is the transcript.

A) The film was released on May 11th in Tamil Nadu as Irumbu Thirai and is declared as a super hit at the box office. Now, we are bringing it to Telugu audience as Abhimanyudu and are expecting the same kind of reception. The film will have a good social message narrated in a commercial manner.

Q) What kind of issues did you expose in the film?

A) We mainly focused on the Digital India concept. We clearly showcased the kind of problems people are facing by providing their information in public domain and how Digital India is affecting our lives. At the same time, we also tried to educate the masses. One more thing is that we didn’t make the film as an anti-BJP propaganda film.

Q) About your director P.S. Mithran?

A) Mithran met me three years back with this script. Though he is a debut director, Mithran had clarity on what he is narrating. He tried to create awareness among the masses with this film.

Q) Why didn’t you plan for a simultaneous release in Telugu?

A) As we planned for a grand release and wanted a good number of theaters, we couldn’t make it on May 11th.

Q) Tell us about Arjun’s role?

A) His name is White Devil, who steals valuable information by hacking and commits crimes. Arjun did total justice to his role.

Q) As a responsible citizen, what kind of service would you like to do?

A) As an actor, I always wanted to educate the public with my films. I believe that cinema has that power to take any issue to the audience aggressively. I will continue to do the same with my upcoming films.

A) Yeah, I’m eagerly waiting to start the shoot as early as possible. The story is also very much connected to the ongoing incidents in the country. Unlike Telugu, we are planning a new kind of editing pattern for this film. AR Murugadoss’ assistant will direct the film.