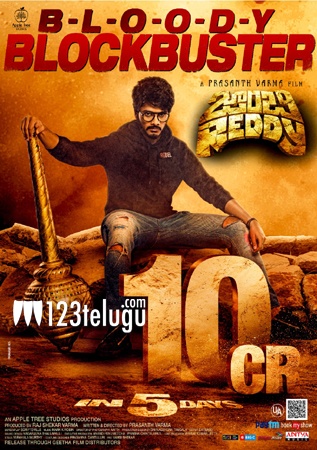 The makers of young actors Teja Sajja, Anandhi and Daksha Nagarkar’s zombie comedy, Zombie Reddy, are thrilled with the film’s performance at the box-office. The latest update from the film’s PR team reveals that Zombie Reddy has collected a total worldwide gross of Rs 10 crore in 5 days.

After creating a decent pre-release buzz, Zombie Reddy had its theatrical release on February 5. The film, even though received a mixed response from critics and audiences, managed to entertain the family audience thanks to the non-stop entertainment. Even the ‘zom-com’ novelty factor has helped the film post decent numbers at the ticket counters.

Directed by Prasanth Varma, Zombie Reddy has been produced by Raj Shekar Varma. The film has its music composed by Mark K Robin.