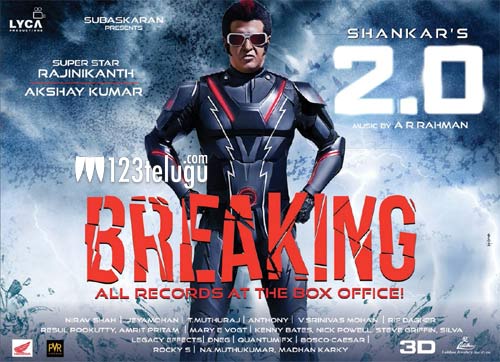 After grossing $983,305 from its Wednesday premieres and Thursday. Super Star Rajinikanth and maverick director Shankar’s sci-fi extravaganza, 2.0, has grossed $649,295 from 286 locations until 12 AM on Friday. A few more thousand dollars will be added once the complete tracking is done.

Until Friday night, 2.0’s Tamil, Telugu and Hindi versions are expected to end up collecting a gross of $1.75 million. While the film will breach the $2 million mark in a few more hours, the advance bookings for Saturday shows hint at a $3 million weekend.

However, with nearly $7 million at stake to break even, 2.0 needs to perform exceedingly well across the USA even on the weekdays. Keep browsing 123telugu.com for more box-office updates.