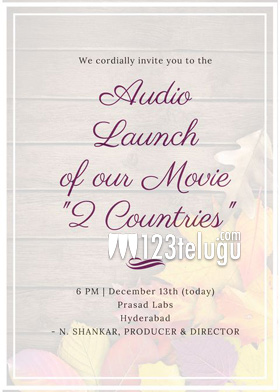 Comedian turned hero Sunil’s upcoming fun entertainer, 2 Countries, is slated for a December last week release. The film’s trailer was unveiled a few days ago and is getting decent feedback on social media platforms. 2 Countries is an official remake of the super hit Malayalam entertainer of the same title.
Meanwhile, the latest update is that the film’s audio launch event will be held today at Prasad Labs in Hyderabad from 6 pm onwards. Noted director N Shankar, who had directed Jai Bholo Telangana and Sriramulayya in the past, has directed and produced 2 Countries. Debutant Manisha Raj is the film’s leading lady.