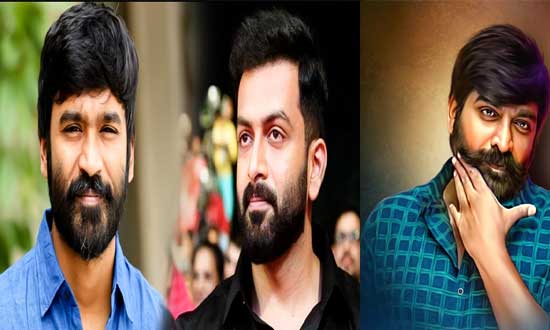 Now, Kollywood circles are abuzz with a crazy buzz that Dhanush, Vijay Sethupathi and Prithviraj have lined up a whopping 60 movies altogether in the coming years. While Prithviraj is leading the table with a staggering 30 movies, including Lucifer’s sequel as a director, Vijay Sethupathi stands next with 19 movies. Finally, Dhanush has reportedly lined up 11 movies in the next few years.

Hollywood biggie The Gray Man with the Russo Brothers, Bollywood film Atrangi Re with Akshay Kumar and Aayirathil Oruvan 2 (Yuganiki Okkadu 2 in Telugu) with his brother Selvaraghavan and Jagame Thandhiram under Karthik Subbaraj’s direction are some of the crazy projects in Dhanush’s lineup.

On the other hand, Vijay Sethupathi’s lineup looks interesting with the soon-to-release Master co-starring Vijay, Uppena and Mani Ratnam’s web-series Navarasa. Finally, Prithviraj has lined up some of the exciting projects like Aadujeevitham, Kaduva and Jana Gan Mana to name a few.