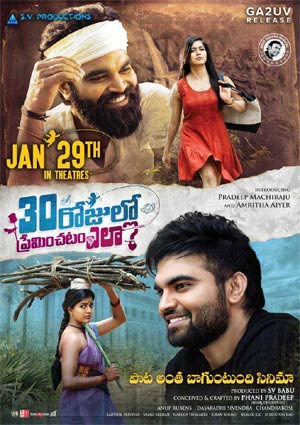 It is a known fact that 30 Rojullo Preminchatam Ela marks the debut of popular anchor Pradeep Machiraju as hero. Amritha Aiyer is paired opposite him in the youthful musical romantic entertainer being helmed by Munna.

Anup Rubens has provided sound tracks for the film and the makers have released three songs so far. All the songs got tremendous response; particularly music lovers became obsessed with Neeli Neeli Aakasam song which got 218 million views thus far.

Meanwhile, the film’s release date has now been announced for January 29th. The film is produced by successful Kannada producers SV Babu under SV Productions banner.