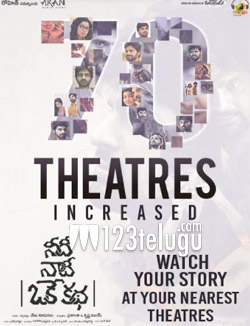 Released on Friday, Sree Vishnu’s much-talked-about social drama, Needi Naadi Oke Katha, went on to receive critical acclaim. The film’s collections have been quite decent over the weekend and this prompted the makers to add extra screens for the movie.

As per the latest updates from NNOK’s team, a whopping 70 screens have been added across Andhra Pradesh and Telangana. The makers further said that NNOK entered the profit zone in the first weekend itself.

NNOK has collected a share of Rs. 1.90 crores worldwide, including Rs. 1.60 crores from the twin Telugu states and another Rs. 30 lakhs in overseas. The film was made with a budget of Rs. 2.25 crores, including the publicity expenses, and Rs. 2.30 crores were recovered before the release itself. The film’s Hindi rights were sold for 40 lakhs and the satellite rights are yet to be sold.

Debut director Venu Udugula’s poetic narration of the father-son’s emotional conflict and Sree Vishnu’s intense performance are the major assets of the movie. Suresh Bobbili’s music also played its part in the film’s success. Satna Titus is the leading lady this film, which is produced under Aran Media and Sree Vyshnavee Creations banners.