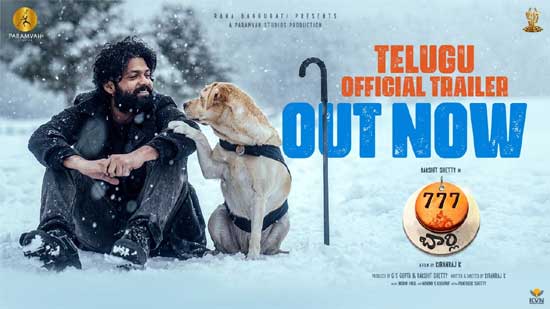 As announced earlier, actors Venkatesh, Sai Pallavi and Manchu Lakshmi have released the Telugu trailer of 777 Charlie today. Starring Rakshit Shetty and Charlie in prominent roles, the movie is written and directed by Kiranraj.

The trailer looks promising and hits emotionally. Rakshit Shetty is a guy who lacks interest in everything. One day, a dog arrives at his doorsteps. Rakshit tries to get rid of this but ends up a failure. Finally, he makes a good relationship with the dog. While everything is cool, something unexpected happens in their lives. What happens next to the dog and how Rakshit brings it back is the rest of the story we need to watch in the main movie.

Rana Daggubati is presenting this Kannada film in Telugu. Sangeetha Sringeri, Raj B Shetty, Danish Sait, Bobby Simha, and others played key roles in this movie. GS Gupta and Rakshit Shetty produced this adventure comedy movie, which has Nobin Paul’s music. The movie will hit screens on June 10, 2022.